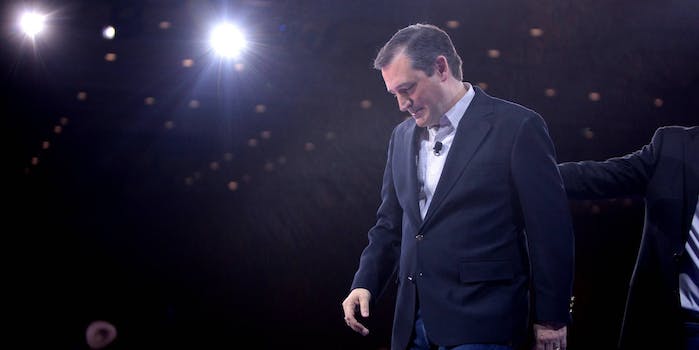 “What if this, right now, is our last time?” asked Cruz before being booed off stage in Cleveland.

Four months ago, Donald Trump threatened to “spill the beans” on primary opponent Ted Cruz’s wife. The following day, he tweeted a professional headshot of his own wife, Melania, side by side with an unflattering photo of Cruz’s wife, Heidi—by all appearances, it was a screenshot of her face stuck in mid-speech.

On Wednesday night, speaking before the Republican National Convention crowd at the Quicken Loans Arena in Cleveland, Cruz could not bring himself to endorse the “pathological liar” and “narcissist” he had once called out for being a “sniveling coward.”

Cruz, whom Trump had branded “Lyin’ Ted,” congratulated the Republican nominee on his victory. Then he tore into President Obama and Hillary Clinton. “We stand here tonight a nation divided,” he said, while endorsing Trump’s wall along the Mexican border. He attacked the “political establishment” over broken promises and for ignoring “the will of the people.”

“What if this, right now, is our last time?” Cruz asked the crowd. “Our last moment to do something for our families and our country?”

“Don’t stay in home in November,” he said. “Stand and speak and vote your conscience.”

An already frustrated crowd turned on Cruz as it became clear he had no intention of endorsing Trump’s candidacy. Livid, some booed while others chanted in unison over Cruz’s own words: “Trump! Trump! Trump!”

“I appreciate the enthusiasm of the New York delegation,” Cruz replied, mocking them, unfazed. Adding an extra layer to the drama, Trump suddenly appeared as Cruz’s speech came to an end. The nominee waded into the crowd before joining his family.

Trump appears in the hall during Cruz's speech WWE-style.

HEIDI CRUZ escorted out by security as crowd gets angry at Cruz for his speech. One Trump supporter shouting "Goldman Sachs!" at her

Unity wasn’t the word that came to mind after Cruz was finished speaking. But Trump didn’t seem to mind.

Wow, Ted Cruz got booed off the stage, didn't honor the pledge! I saw his speech two hours early but let him speak anyway. No big deal!