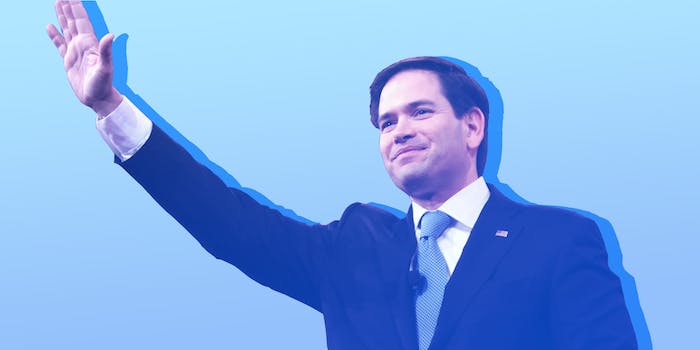 The AP has confirmed that it did not license the image to the Super PAC.

A Super PAC attack ad targeting Texas Sen. Ted Cruz used a photo of President Barack Obama and House Minority Leader Nancy Pelosi that bore an Associated Press watermark, indicating that it was not licensed for use.

The ad, entitled “Tax Plan,” was created by the Conservative Solutions PAC, which is backing Sen. Marco Rubio (R-Fla.). It is largely based on a heated exchange between Cruz and Rubio during last week’s Republican primary debate over Cruz’s proposed 16-percent flat tax on businesses. Rubio argued that it effectively amounts to a value added tax similar to the taxation “like they have in Canada and European socialist countries.”

As the ad warns that “Obama and Pelosi say they’re open to” such a tax, an Associated Press photo of Obama and Pelosi flashes across the screen, with the watermark intact in the lower right-hand corner of the image. 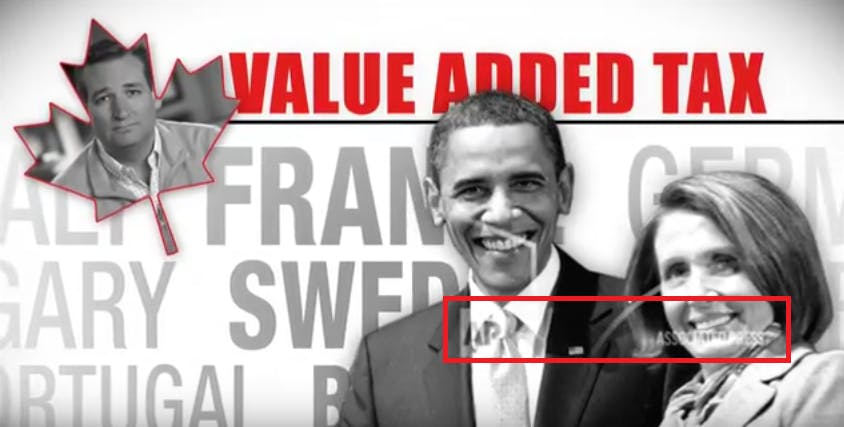 In addition to its wire service, the AP also operates a photo-licensing service built on its vast photos archives. The presence of a visible watermark on the image is typically an indication that the AP has not granted formal approval to use the image.

In an email to the Daily Dot, an AP spokesperson confirmed that the watermarked image was used without permission. Conservative Solutions did not respond to multiple requests for comment.

“Support for Marco’s positive conservative vision and his potential presidential run is growing every day, and I’m honored to help in that effort,” the group’s founder, J. Warren Tompkins, said in a statement to the Washington Post prior to the PAC’s unveiling. “This race will be won by the candidate with the best vision for where to take this nation and the resources to ensure that message is heard. Marco has the vision–few have laid out in as much detail where they’d like to lead this country–and we’re going to spend the next two years ensuring that the resources are there and used to effectively share that vision with voters.”

According to data collected by OpenSecrets.org, Conservative Solutions has spent more than $25 million on the 2016 election cycle, with the overwhelming majority bolstering Rubio and a significantly smaller amount aimed at attacking other candidates.

There is a long history of groups using unlicensed AP photos for political purposes. After artist Shepard Fairey used an AP photograph of Obama for his iconic “Hope” campaign poster, it triggered a legal battle that only ended when the two sides reached a civil settlement in 2011.