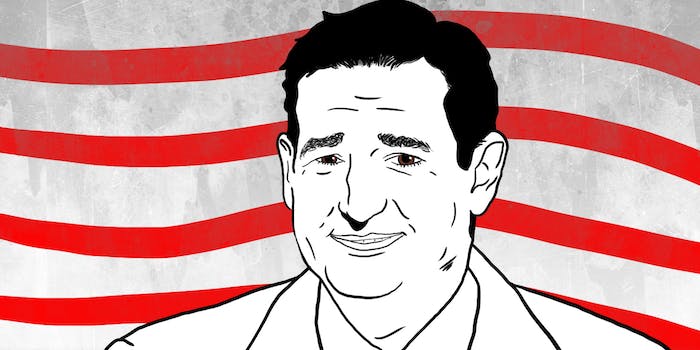 The trouble with the presidential hopeful's Periscope broadcast.

“Remember 1979 and 1980” is Ted Cruz’s newest battlecry in his campaign for president.

Muttered during a Monday speech that he broadcast on Twitter’s new Periscope app to about 130 viewers, the call is meant as a sharp criticism of President Obama and rival candidate Hillary Clinton over what Cruz calls a “terrible deal” being negotiated between the U.S. and Iran over the country’s nuclear ambitions.

Cruz urged Americans to remember that in 1979 and 1980, Iranian Islamists seized power and took 52 Americans hostage and held them for over a year. They were released on “the first day Ronald Reagan took office,” Cruz said to a loud applause at a John Locke Foundation lunch.

Cruz has been hammering away on 1979 for years but, curiously, he never seems to mention what happened in Iran before that landmark period. That signals a severe blind spot in how Cruz sees U.S.-Iran relations.

In 1953, the United States and United Kingdom orchestrated a coup that overthrew Iran’s democratically elected prime minister government and replaced it with a puppet-king known as the Shah of Iran. This dictator was installed and helped maintain Western control of Iranian oil.

Instead of allowing a British-controlled company wield power over Iranian oil, Iranian Prime Minister Mohammed Mossadegh wanted the oil under his own country’s control in order to “meet our entire budget and combat poverty, disease, and backwardness among our people,” Mossadegh claimed.

For that, he was thrown out of power in a plot orchestrated by the highest levels of American power, including President Dwight Eisenhower.

This isn’t fringe conspiracy theory, it’s thoroughly documented truth. Although it’s been widely known for many years, the Central Intelligence Agency just two years ago publicly admitted the American role in the coup.

“The military coup that overthrew [Iranian Prime Minister] Mosaddeq and his National Front cabinet was carried out under CIA direction as an act of US foreign policy, conceived and approved at the highest levels of government,” read CIA documents released in 2013.

Over the next 26 years, the Shah ruled Iran on the strength of American and British imperialism. He served as a reliable ally of the United States while wielding repressive secret police that took thousands of political prisoners as well as torturing and killing opponents.

The American-led coup is rarely if ever discussed in U.S. politics even though the 1979 Islamic Revolution and the subsequent hostage crisis is brought up all the time.

In Iran, they’ll likely never forget 1979 and 1980. But they also remember 1953, one of the most important years in Iranian history and a perennially embarrassing episode in American foreign policy.

When Cruz brings up 1979 and 1980, his failure to mention the events that led to revolution and hostage crisis of those years is an especially heinous failure now that he is running for president and inserting himself directly into recent negotiations between Iran and the U.S.

The 1979 Islamic Revolution in Iran took place as a direct reaction to the American-backed dictator, the Shah. The subsequent hostage crisis triggered a mutual mistrust that persists to this day. In late 1980, a decade-long war began between Iran and Iraq that would end with hundreds of thousands of casualties. America offered deadly support to the Iraqi army even as it launched chemical attacks on the Iranians. But before it all, the roots of the situation can be even further than 1953 to British imperialism that repressed the Middle East and reverberates painfully to this day.

While the United States loudly trumpets its pro-democracy values, Iranians with any sense of history know those values can go out the window in a heartbeat. To remember and truly understand 1979, it’s important to put it in the context of 1953. Especially if you’re running for president.