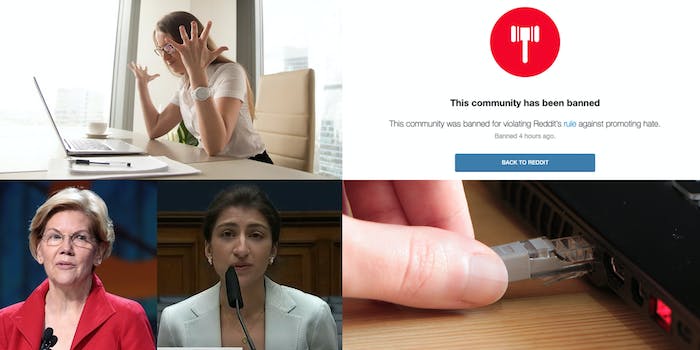 Nearly half of Americans aren’t satisfied with the price they are paying for their broadband service, according to a new survey.

The survey, from Consumer Reports, found that 42% of those polled were “dissatisfied” to some degree about the price they’re paying for their internet service.

Additionally, 21% of people asked said it was “somewhat difficult” to afford their monthly internet bill, with 3% saying it was “very difficult” to do so.

But the dour views on broadband service went further.

“This survey reinforces what we already suspected: that getting online for millions of Americans is too costly, and in many cases the service is inadequate,” Jonathan Schwantes, senior policy counsel at Consumer Reports, said in a statement.

Discover science through a storyteller’s lens with Nautilus

Nautilus is a magazine of scientific ideas that matter, featuring stories that will challenge and enrich the way you view the world. Discover new, surprising perspectives on how science interacts with all aspects of life—medicine and health, of course—but also politics, art, food, work, technology, and sports. Join a community of curious readers exploring scientific subjects in profound, unexpected ways, and experience science, connected.

A prominent anti-feminist subreddit was banned for violating Reddit’s policies on promoting hate.

Part of the “Men Go Their Own Way (MGTOW)” movement, the r/MGTOW subreddit was run by advocates of male separatism or the belief that men must distance themselves from women and society.

The subreddit, according to a January 2020 report from a team of computer scientists, had been linked to numerous instances of “online harassment and real-world violence.”

Not long after news of the report surfaced online, Reddit placed r/MGTOW under quarantine. Subreddits placed under quarantine do not appear in search or recommendations and include a warning before they can be viewed.

In a statement to the Daily Dot, a Reddit spokesperson said that the subreddit’s removal was linked to policies regarding the promotion of violence and hate.

Sen. Elizabeth Warren (D-Mass.) and a group of lawmakers pushed back against recent requests by Amazon and Facebook to have Federal Trade Commission (FTC) Chairwoman Lina Khan recuse herself from antitrust matters involving the big tech companies.

In their letter to Facebook CEO Mark Zuckerberg and Amazon CEO Andy Jassy the lawmakers said the recusal requests were adding to the “perception” that they were trying “to bully your regulators.”

In June, Amazon pressed for Khan’s recusal, saying that she would not be able to be “a neutral and impartial evaluator” in antitrust issues involving the company. Facebook followed that up a few weeks later with another recusal request.

Khan, who has drawn massive support from progressives, has been an outspoken critic of big tech companies.

In their letter, the lawmakers argued that the big tech companies’ attempts to have Khan recuse herself were “illogical and inconsistent with the plain language of the relevant statutes.”

“The real basis of your concerns appears to be that you fear Chair Khan’s expertise and interpretation of federal antitrust law,” the letter reads.