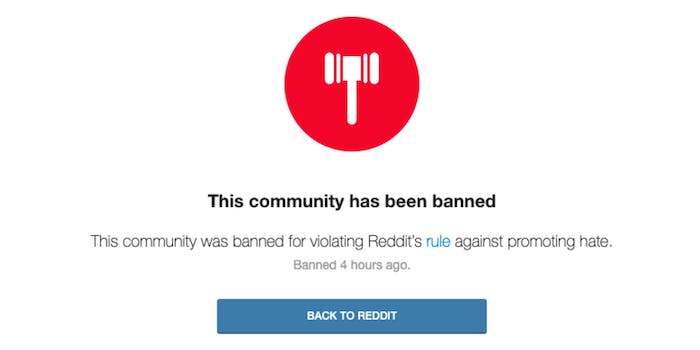 A prominent anti-feminist subreddit was banned on Tuesday for violating Reddit’s policies on promoting hate.

Part of the “Men Go Their Own Way (MGTOW) movement, the r/MGTOW subreddit was run by advocates of male separatism or the belief that men must distance themselves from women and society.

The subreddit, according to a January 2020 report from a team of computer scientists, had been linked to numerous instances of “online harassment and real-world violence.”

Not long after news of the report surfaced online, Reddit placed r/MGTOW under quarantine. Subreddits placed under quarantine do not appear in search or recommendations and include a warning before they can be viewed.

In a statement to the Daily Dot, a Reddit spokesperson said that the subreddit’s removal was linked to policies regarding the promotion of violence and hate.

“Reddit’s site-wide policies explicitly prohibit content that incites violence or promotes hate based on identity or vulnerability,” the spokesperson said. “The subreddit in question was banned in accordance with these policies.”