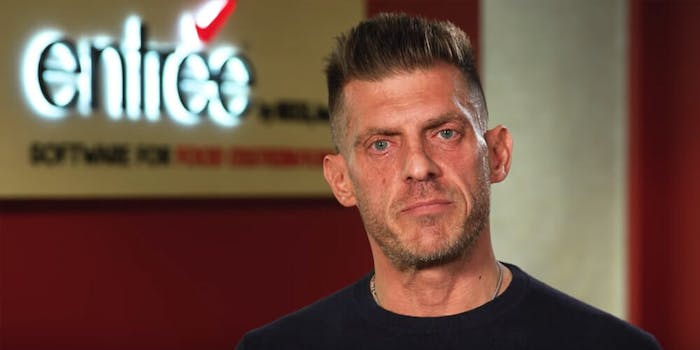 A tech company is blaming the “Mandela Effect” after customers began complaining about issues with their software.

In a video posted to YouTube this week, Christopher Anatra, president of food distribution software company NECS, spent 15 minutes telling his clients that alternate realities, not problems with their software, were to blame for unexplained changes in data.

The Mandela Effect is a phenomenon in which countless people all share the same false memory. For example, despite many people believing that the comedian Sinbad played a genie in a 1990s movie called Shazaam, no such film exists. Although scientists believe there is a logical explanation for why this occurs, Anatra and others believe it’s because we are holding onto memories from a parallel universe.

“I want to stress that this is not our software making these changes,” Anatra says. “Changes in data is a phenomena that software technology companies like NECS have been noting, most especially as it affects our bottom line and requires more technical support resources.”

In a blog post on the issue, Anatra goes on to point out numerous examples of the Mandela Effect as proof his software isn’t to blame. If the software suddenly says that a customer who always bought 20 cases of French fries each month now only buys 5, it’s because they are buying both in two different timelines… or something to that effect.

“You now understand that even though your memory may clearly tell you one version of an event, your consciousness may have navigated to another reality, where your memory no longer is true to the reality,” Anatra writes.

The company president even claims to have presented his findings to employees during a recent three-day training event.

“They weren’t expecting this as part of their training!” Anatra adds.

“This video was wholly unexpected,” one Reddit user wrote. “I’m surprised in the most delightful way that someone articulated the Mandela Effect as a phenomenon that can affect business and data.”

Others questioned whether the video was merely the “greatest troll of all time.”

This is FREAKING ME OUT!! It’s either the greatest troll of all time or more proof that the tachyon particles being blown backwards through time by the impending singularity are actually disrupting history. https://t.co/n8Fy9IeDi8

Either way, the message is clear. If your computer is on the fritz, don’t blame technology. Blame the universe. Or universes.