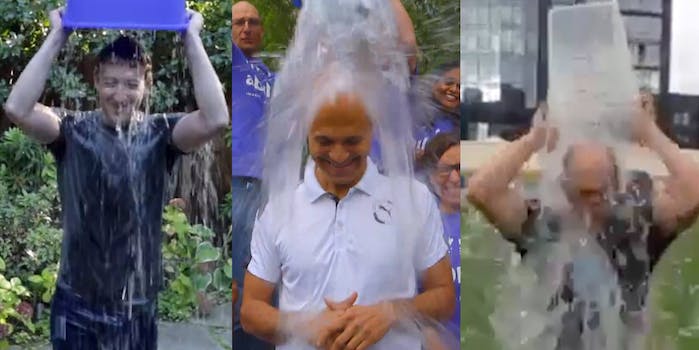 Even world-famous startup founders are getting in on the action.

Here’s something you never expected to see: Mark Zuckerberg dumping a bucket of ice on his head because Chris Christie told him to.

The 30-year-old Facebook founder posted a video on his Facebook profile on Wednesday night engaging in the latest social media craze—ice bucketing. Here’s how it works: You take a bucket of ice water, and dump it over your head. Yeah, that’s pretty much it.

Ice bucketing isn’t a harbinger of the end of days however; it’s part of a social media campaign to raise money for the ALS Association, which supports people with amyotrophic lateral sclerosis, or motor neurone disease. Participants are encouraged to video themselves doing the challenge, and then nominating three others to do it. Once nominated, they have 24 hours to do it, or must donate to ALS Association (though of course, participants are encouraged to donate anyway).

And Zuckerberg isn’t even the only tech executive at it—here’s Satya Nadella, Microsoft CEO, getting drenched for a good cause:

Nadella was nominated by former NFL player Steve Gleason, who suffers from from ASL himself. Nadella made a unspecified donation, and Microsoft made two gifts of $25,000, to the ALS Association, and to Gleason’s own Team Gleason, the Seattle Times reports. Nadella went on to nominate Jeff Bezos—head honcho at Amazon—and Google’s Larry Page, raising the prospects of many more high-profile tech exec ice bucketing cases in the days ahead.

Twitter’s CEO Dick Costolo is getting in on the action too: Appropriately enough, it’s been uploaded to Twitter-owned 6-second video-sharing service Vine, and he goes on to nominate Carl Quintanilla, an anchor at CNBC, and Spencer Rascoff, director of Zillow and TripAdvisor.

Ice bucketing has been a resounding success for the the ASL Association, raising more than $4 million from more than 70,000 new donors in the period from July 29 to August 12. For context, the charity made just $1.12 million in the same time period in 2013. President and CEO of the charity, Barbara Newhouse, said that “we have never seen anything like this in the history of the disease… We couldn’t be more thrilled with the level of compassion, generosity and sense of humor that people are exhibiting as they take part in this impactful viral initiative.”

Justin Timberlake has also partaken in the charity challenge, as has Martha Stewart—but President Barack Obama has sadly declined, preferring to donate money instead.

More information on ALS is available on the ALS Association’s webpage, and you can donate by clicking here.