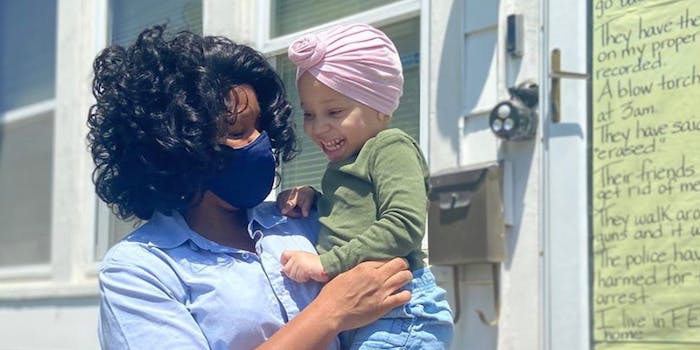 One man is live-streaming his shifts.

New York woman Jennifer McLeggan says despite facing years of harassment, including vandalism and death threats, from her racist neighbors, Long Island police refused to help her. But after McLeggan posted a now-viral sign in her front window detailing the situation, her Black neighbors stepped in to protect her themselves.

McLeggan also said she won a civil suit against her neighbors after her camera caught them throwing human feces onto her yard but that police still refused to intervene, claiming nothing could be done unless she was physically harmed.

Terrified that she’d be killed, McLeggan wrote up everything she said happened since she moved in and placed the sign in her front windows.

A photo of sign made its way onto social media, and people from across New York responded with offers of help. The first to show up was a Queens resident named Anthony Herron who also goes by Flow. Speaking to Blavity, Herron said that when he offered help, McLeggan only requested prayers.

But he wasn’t satisfied with that. “We don’t know what can happen,” Herron told Blavity. “I take threats to Black women very seriously.”

Now, every night since July 12, Herron has sat guard outside of McLeggan’s house all night, live-streaming the whole time to ensure his and McLeggan’s safety.

After a few days, other Black neighbors—including, allegedly, members of the Crips gang from Queens—joined him in guarding McLeggan’s house.

Soon, enough people had shown up that the house was never unguarded, even during the day. People donated food, water, and camping equipment to keep the guards comfortable.

New York State Assemblywoman Michaelle Solages, who found out about McLeggan’s situation via social media, also took action. After reaching out to McLeggan and contacting the local police department to ask why it wasn’t doing more, Solages said she looked into drafting legislation to protect people in similar situations.

After Herron began his watch and the assemblywoman got involved, the police have shown more interest in McLeggan’s case.

But Herron said police seemed more focused on the group watching over McLeggan’s house than protecting her.

“The Nassau Police Department form of ‘Police Presence’ last night was parking their jeeps FACING the cars of the protectors of the house and having their high beams on ALL night,” Herron tweeted on Friday.

The Daily Dot has reached out to McLeggan, Herron, and Solages and will update this post if they respond.