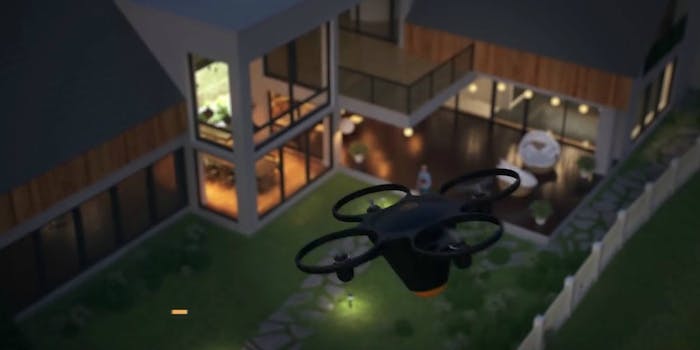 If drones can help us change light bulbs, potentially deliver us a burrito, or drop vaccine-coated M&Ms to help keep ferrets alive, why can’t they be the watchdogs of our home residences?

Sunflower Home Awareness System has apparently asked the same question. That’s why it’s developed an alarm system that will dispatch a drone to check out any suspicious activity on your property and will send you the live footage on a mobile app so you know exactly what’s happening. As the website states, “Sunflower Smart Lights learn your property’s routines, deterring unwanted visitors with light and sound. When there’s unusual activity, the Smart Lights work with the Sunflower Flying Camera to identify what’s happening.”

Unlike stationary home-security systems like Nest, this alarm system investigates any potential problems on its own.

“The system consists of these two parts,” founder Alex Pachikov told Digital Trends. “There are really advanced sensors that you place around your property. These can detect motion, vibration and sound. In the event that you want to take a closer look at something, you can then deploy a drone to investigate what’s happening and send back live video. It’s truly a next generation security system.”

If the sensors in the smart light detect movement, it’ll flash lights and make noise to scare off any kind of critter or rodent that’s invaded your property. But if it’s unclear what’s making the disturbance, the system will dispatch the drone, which will fly itself to determine the issue. According to Pachikov, the drone could fly around for as long as 15-20 minutes and charges itself when it’s not flying.

“The flying camera when it arrives at the scene is a deterrent in and of itself. Anybody who’s doing something they shouldn’t on your property when they see the flying camera arrive above them will mostly likely stop and leave it alone,” Pachikov said, via CBS San Francisco.

For now, Sunflower Labs doesn’t have a launch date for the system and hasn’t announced how much it’ll cost. But Pachikov told Digital Trends that the service would be best utilized as subscription-based.

“This would have been impossible three years ago,” Pachikov told Digital Trends. “The technology that we’re using simply didn’t exist: from the precision of navigation to the sensor analysis based around machine learning. All of these things only came together very, very recently.”