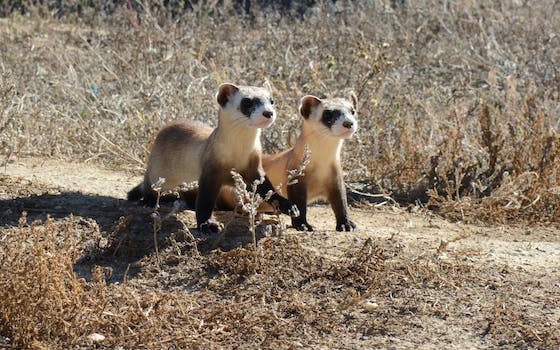 Vaccine-laced M&Ms are being air dropped to endangered ferrets

The Department of Fish and Wildlife hopes it'll save the furry critters.

Adorable black-footed ferrets are facing an epidemic that threatens to wipe out a huge portion of their endangered population. The U.S. is combating this problem with vaccine-coated M&Ms delivered via drone.

The flea-borne disease sylvatic plague affects both the ferrets and their favorite prey, prairie dogs, according to the Guardian. But the U.S. Department of Fish and Wildlife plans to deliver the vaccine-laced M&Ms to the UL Bend National Wildlife Refuge in Montana in September. The M&Ms are actually for the prairie dogs, not the ferrets. But if they can vaccinate the prairie dogs, which make up the vast majority of the ferrets’ diet, then hopefully they can protect the ferrets from picking up the disease from their prey.

The black-footed ferret was actually declared extinct until 1979, according to Nerdist. But after a dog brought a dead one home to its owner in 1981, researchers knew that there was still a small population. Their numbers are now down to 300.

H/T: the Guardian, the Nerdist