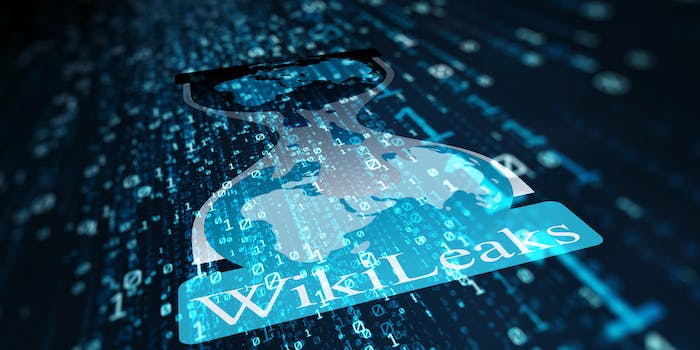 None of the transparency group's secure methods work.

The ongoing Russian invasion of Ukraine has led to a prominent surge in hacktivism across the globe, yet the transparency organization WikiLeaks has seemingly made it impossible to provide them with any leaks.

Ukraine last week took the unusual step of asking for volunteers from the country’s hacker underground in an effort to protect critical infrastructure and carry out surveillance on Russian troops.

Hackers claiming affiliation with the Anonymous collective have likewise sprung into action. Tactics ranging from DDoS attacks against Russian state-run media outlets to hack and leak operations have been ongoing since the invasion began.

A slew of login credentials alleged to belong to employees of Russia’s Ministry of Defense have been leaked online. The hacktivist groups known as Anonymous Liberland and the Pwn-Bär Hack Team even leaked over 200GB of emails from the Belarusian weapons manufacturer Tetraedr. Belarus has become a target for hackers given its support of the Russian invasion. The emails, analyzed by the Daily Dot, show everything from missile testing footage to detailed schematics for weapons systems.

But despite the deluge of leaked material, nearly every method provided by WikiLeaks for submitting hacked or leaked documents are not operational. Although WikiLeaks has significantly reduced its leaking activity in recent years, the timing of the issue raises questions for some given not only WikiLeaks release of documents provided by Russian government-backed hackers during the 2016 election but the group’s refusal to publish documents from the Russian Interior Ministry that same year.

An address provided for submitting content to WikiLeaks’ through its onion service, a domain on the dark web that allows users to send documents anonymously, appears to be offline when clicked.

A notice on the domain states that the onion service cannot be found.

WikiLeaks notes that users who cannot access its onion service can use “several alternative methods.” The other submission methods listed, however, lead to similar results

A contact page for the transparency organization states that users who cannot access the dark web can reach out over its “simple webchat” to receive assistance.

Clicking on the webchat link sends users to a page displaying a “502 Bad Gateway” message.

A secure version of WikiLeaks webchat hosted on the dark web produces more or less the same response.

“The provided onionsite address is invalid,” a notice states. “Please check that you entered it correctly.”

The web address failing to load is not unexpected given that the transparency group is still using an outdated onion service version that was completely disabled in October of last year, suggesting that the domain for its “secure webchat” has been inaccessible for nearly five months.

It currently remains unclear how long WikiLeaks’ secure submission methods have been unreachable. But the organization just last month asked followers to visit its submission page despite its onion service being unreachable.

Even sending a secure email to WikiLeaks appears to be a difficult task. A subdomain on WikiLeaks for a volunteer group known as the “WL Research Community” notes that although the organization does have a PGP key for sending encrypted emails, users are urged not to make any submissions over email. Users are instead urged to use the aforementioned contact methods that do not currently work.

The Daily Dot reached out to WikiLeaks to ask whether it was aware of the issues on its submission page but did not receive a reply.

The organization as of late has been largely focused on fundraising efforts given the incarceration of its founder Julian Assange.

Update 2:32pm CT, March 1: The Daily Dot reached out to WikiLeaks’ official press email but did not receive a response by press time. Roughly an hour later, the WikiLeaks Twitter account reached out to the Daily Dot over direct message to ask where the media inquiry had been sent. After being told to check their press email, the organization said that it was dealing with “technical issues which are being resolved.”

The Daily Dot later received an email indicating that WikiLeaks’ email server had not accepted the inquiry. Analysis of the server indicated that it was offline. It remains unclear how long WikiLeaks’ has been unable to receive emails at its primary domain.