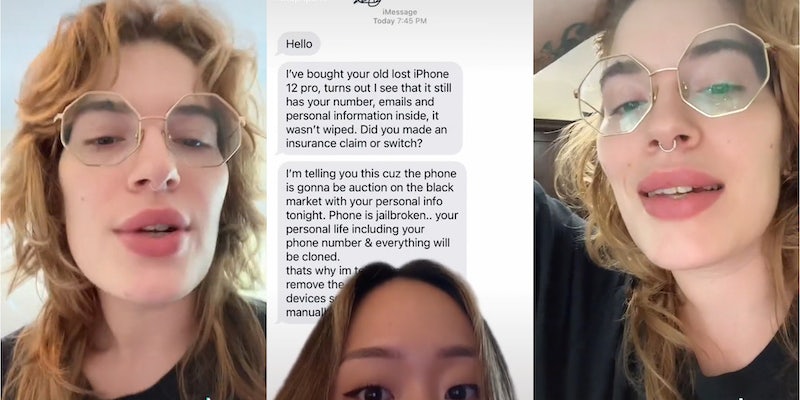 'Should I just delete it?'

A tech worker has gone viral on TikTok after explaining how iPhone thieves use extortion in order to resell stolen devices.

In a video with more than 826,000 views, TikToker user @stella.kim revealed that she began receiving strange messages on her new phone after her old phone was stolen at the Coachella Valley Music and Arts Festival in California.

The messages claimed to come from an individual who had purchased the “old lost iPhone” and that all of the TikTok user’s information was still accessible. Not only that, the phone, which @stella.kim says was now located in China, was supposedly set to be auctioned off on “the black market that evening.”

Unless @stella.kim removed the phone from her Apple account, the message alleged, her personal information would become available to whoever won the auction.

“Can anyone from Apple or anyone whose knowledgeable in this help me out here?” the TikToker asked her followers. “Should I just delete it?”

An alleged tech worker using the handle @stopitparis responded with an explanation not long after that has since racked up over 4.7 million views. The Daily Dot attempted to reach @stopitparis to inquire about her video but did not receive a reply by press time.

In the video @stopitparis states that she has been a certified hardware engineer for the past 6 years and runs into this exact issue on a daily basis.

The scammers, according to @stopitparis, are actually attempting to get @stella.kim to de-link her Apple account from the phone to allow them to set it up for a new user.

“Now every time an iPhone is signed in in the settings to an Apple ID, it gets locked to that Apple ID account,” @stopitparis says. “And then let’s say someone plugs that phone into a computer—tries to erase it, get everything off of it, try to set it up again—it will forever go to that page that says ‘activation lock’ and it will ask you for your Apple ID, email, and password.”

In other words, the phone is entirely useless and cannot be used unless @stella.kim removed the phone from her account.

“So what this means is that whoever has your phone in China has already erased the device, they’ve tried to get it ready to sell it again, you know, get it back to factory settings, but then they realized ‘oh no, it’s activation locked, so we can’t sell this phone because no one will be able to use it,'” @stopitparis says. “So who are they trying to contact? The old owner.”

Despite the scammers’ claims, @stella.kim’s personal phone data is not accessible. Therefore, the phone will likely be stripped and sold for parts.

“So you can rest assured knowing that they don’t actually have any of your information,” @stopitparis adds.

Other iPhone users are encouraged to ignore any such messages if their device is ever stolen.