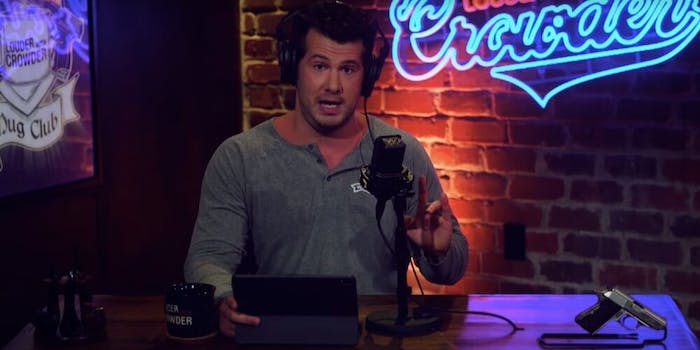 “He deleted it, so I just want to make sure everyone sees that Steven Crowder has managed to hit a new low,” Hilary Agro tweeted.

This isn’t the first time Crowder has been embroiled in problems because of his comments online. In May, Carlos Maza, a video producer for Vox, shared on Twitter a compilation of Crowder’s talk show videos that include racist and homophobic slurs about him. In the videos, Crowder called Maza a “lispy sprite,” “gay Mexican,” and “little queer.”

Maza shared the videos in the hopes to get the attention of YouTube, where Crowder has 4.2 million subscribers. The company said in June that while the videos are hurtful, they don’t violate the company’s policies.

Crowder is also known for the meme of him sitting at a table outside of Texas Christian University with the sign that reads, “Male privilege is a myth. Change my mind.”