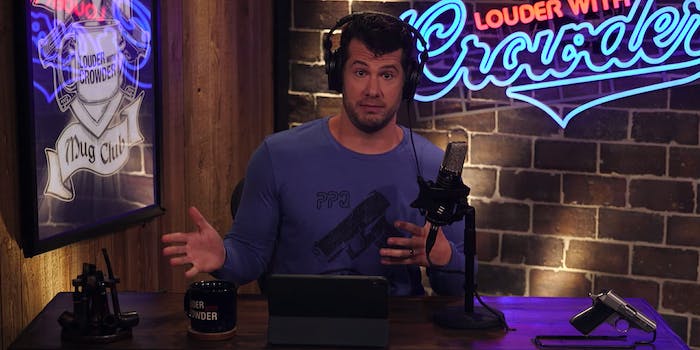 After nearly a week, YouTube has ended an investigation into whether or not conservative YouTuber Steven Crowder, who inspired the “change my mind” meme, has violated the platform’s community guidelines.

The streaming platform concluded that Crowder’s repeated homophobic slurs and racist remarks directed toward Vox writer Carlos Maza did not violate any of its policies, and Crowder’s YouTube channel will remain up and fully operational.

On May 30, Maza, the host of Vox video series Strikethrough, posted a Twitter thread detailing numerous instances of Crowder making homophobic and racist remarks about Maza in his videos over the past two years. Among the insults, Crowder referred to Maza as “mister lispy queer” and “the gay Mexican from Vox.”

In a Twitter thread last week calling out Crowder’s bigotry, Maza explained that the harassment from followers of Steven Crowder’s Louder with Crowder show has ramped up significantly.

“The abuse from his fans has been genuinely out of control,” Maza told the Daily Dot. “Both of my email accounts are getting hit. I had to lock Instagram. My Twitter feed and inbox is a wall of people calling me a ‘faggot’ and threatening to kill me right now.”

It’s déjà vu for Maza, who last year was similarly doxxed when his phone number was leaked. Maza received incessant texts from random numbers insisting that he “debate Steven Crowder.”

Prior to official word from YouTube, Crowder published a video response to Maza titled “Vox is Trying to Ban This Channel…” In the video, he described the situation as “an example of a giant corporate media entity trying to silence voices that they don’t like.” “Make no mistake, this isn’t about me versus some guy at Vox,” Crowder added.

On Tuesday evening, the official @TeamYouTube account posted a series of tweets in reply to Maza’s original thread. The tweets signaled that YouTube had finished its investigation into Crowder, and no disciplinary measures would be taken against his channel.

(3/4) As an open platform, it’s crucial for us to allow everyone–from creators to journalists to late-night TV hosts–to express their opinions w/in the scope of our policies. Opinions can be deeply offensive, but if they don’t violate our policies, they’ll remain on our site.

Maza and other YouTubers were appalled by the news of YouTube’s inaction.

hello @TeamYoutube, youtuber here who is somewhat confused by your moderation policies. wanna help me out here? pic.twitter.com/QjmyeQ0s5b

Hey remember when I made an antifascist video and Nazis mass-flagged it as hatespeech and @YouTube took it down within a day and it cost me a lot of money?

Meanwhile it takes hundreds of tweets, viral video evidence, and several days before they decide "f*g" isn't a slur. https://t.co/row1Knn8TL

YouTube CEO Susan Wojcicki posted a tweet on May 2 that resurfaced during this ordeal. Previously, in a December 17 post on YouTube’s official blog, the CEO expressed that YouTube’s goal “is to stay one step ahead of bad actors, making it harder for policy-violating content to surface or remain on YouTube.”

In the blog post, Wojcicki also details the advancements YouTube’s flagging process has had due to machine-learning algorithms, which been a constant lightning rod for controversy.

My #1 priority is responsibility, even if that comes at the expenses of growth. https://t.co/AnOVkBG0LJ

Wojcicki claims that YouTube values ethics over revenue, but her statement seems to contradict the fact that specific videos where Crowder hurls abuse at Maza are still allowed to host advertisements.

Why are the videos attacking @GayWonk able to be monetized?

This issue hits harder given that it’s playing out during Pride Month. Many have already pointed out that YouTube will virtue signal by plastering rainbow versions of its logo on social media but failing to take direct action against bigotry on its platform.

For Maza, YouTube’s failure to take action against Crowder speaks volumes of the where the streaming platform’s priorities lay.

“YouTube isn’t just failing queer creators. It’s actively exploiting us,” Maza tells the Daily Dot. “It’s publicly pretending to care about us so that it can paint a happy, advertiser-friendly image. But YouTube refuses to enforce the policies that protect us from abuse, and continues to use its technology and algorithms to drive millions and millions of views to videos that dehumanize us, all in the name of engagement.”

Updated 2:25pm CT, June 5: In the wake of some backlash to its decision to not suspend or take down Crowder’s channel, YouTube decided to demonetize it, a frequent tool the social media company uses to try and curb violations of its policies.

Update on our continued review–we have suspended this channel’s monetization. We came to this decision because a pattern of egregious actions has harmed the broader community and is against our YouTube Partner Program policies. More here: https://t.co/VmOce5nbGy

However, YouTube walked that back in a second tweet, saying Crowder’s offense was partially relating to selling T-shirts on his channel that contained slurs. The site said Crowder could remonetize his channel if he removed the link to the shirts.

To clarify, in order to reinstate monetization on this channel, he will need to remove the link to his T-shirts.

That announcement went over poorly.

Show me the diagram that led you to this galaxy brain decision.

LOL ARE YOU KIDDING ME pic.twitter.com/gozNw1pDfH

lmfao are you assembling your policies from clippings of horoscopes from 2012 and the decoder ring game on the back of a box of Froot Loops?

YouTube later clarified that Crowder would continue to be demonetized until he addressed all issues, not just T-shirts.

Sorry for the confusion, we were responding to your tweets about the T-shirts. Again, this channel is demonetized due to continued egregious actions that have harmed the broader community. To be reinstated, he will need to address all of the issues with his channel.