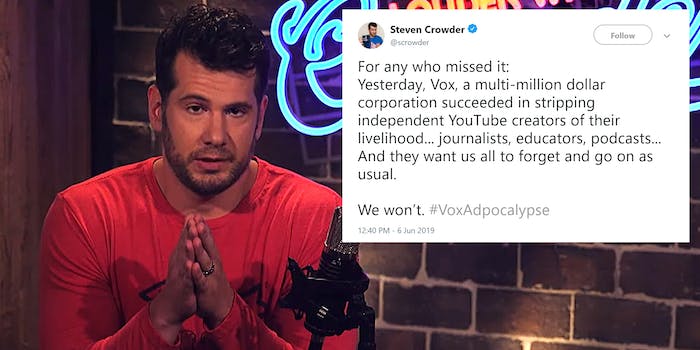 If you have been on Twitter over the past two days, you may have seen an extremely forced portmanteau tacked onto the tweets of some conservatives ranting about YouTube monetization.

It’s VoxAdpocalypse, and while it’s not the smoothest attempt at combining Vox, ads, and apocalypse (#Advoxalypse was right there), it’s not going away.

For any who missed it:
Yesterday, Vox, a multi-million dollar corporation succeeded in stripping independent YouTube creators of their livelihood… journalists, educators, podcasts… And they want us all to forget and go on as usual.

For months, conservative YouTuber and comedian Steven Crowder has been critiquing Maza’s videos. He’s also attacked Maza for his race and his sexuality, at one point calling him a “lispy queer.” Maza says Crowder fans doxed him, and he’s been on the receiving end of tremendous harassment online from some of Crowder’s 3 million YouTube subscribers.

Maza posted a lengthy thread detailing his harassment, but YouTube decided not to suspend Crowder. When that was met with outcries, YouTube decided to demonetize Crowder’s channel.

After Maza lobbied for YouTube to do something about Crowder, YouTube announced a policy cracking down on a vast number of channels pushing conspiracy theories. It’s those two simultaneous decisions that sparked the #VoxAdpocalypse hashtag.

This guy made videos of relaxing sounds, like being at the beach on a rainy day, now Youtube has stripped his monetization.#VoxAdpocalypse https://t.co/tkJiqzKaGt

Why is @TeamYouTube aligning with Carlos Maza, a violent leftist who has called for physical attacks on conservatives? #VoxAdpocalypse pic.twitter.com/NPAaaal3Cm

Although Maza had nothing to do with other channels getting suspended—he was only calling for Crowder to be punished for violating YouTube’s terms of service—he is getting blamed for the other decision.

Conservatives and right-wingers are likening the incident to fascism, saying that a corporate giant, Vox, used its large platform to silence dissent and independent creators.

You don’t have to imagine this anymore. Reality has set in. Don’t miss the truth. https://t.co/HkTkvJI13z #VoxAdpocalypse pic.twitter.com/krhWAA1AX3

The crackdown YouTube announced is for videos that denied the Holocaust and promoted Sandy Hook conspiracy theories. That doesn’t really tie into what was going on with Crowder and Maza.

YouTube’s policy has also been poorly enforced. Several journalists have said their reporting on conspiracy theories has been flagged.

This attack on independent journalists who film/track extremism is not without precedent. @sandibachom has been banned from Twitter twice for covering right-wing groups, where Twitter accused her of posting "hate symbols" that she documented.

YouTube have banned me for 'hate speech', I think due to clips on Nazi policy featuring propaganda speeches by Nazi leaders. I'm devastated to have this claim levelled against me, and frustrated 15yrs of materials for #HistoryTeacher community have ended so abruptly.@TeamYouTube

And Vox and Maza are getting blamed.

YouTube and other social media sites have long allowed hate speech to permeate on their platforms, and in the wake of violent acts, crackdowns are long coming.

Is it all the fault of one person at Vox? Probably not. But the timing of it exacerbates the claims that big tech is biased against conservatives and that Maza was somehow the mastermind behind YouTube enforcing its policies, albeit poorly.