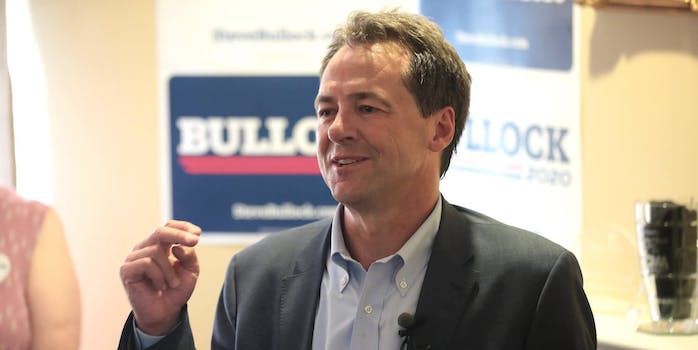 It was supposedly a mistake.

A screenshot of the suspended account, @SteveBullockMT, was shared by National Republican Senatorial Committee adviser Matt Whitlock at 9:45am CT.

By 11:03am, the account was no longer suspended. Whitlock appears to have been the only person who noticed it.

“The account was suspended in error and has been reinstated,” a Twitter spokesperson told the Daily Dot via email.

Bullock’s campaign did not respond to request for comment.

Twitter has historically been reticent to suspend politicians’ accounts, though it has made notable exceptions, such as the permanent suspension of Danielle Stella, the Republican running against Rep. Ilhan Omar (D-Minn.).

Stella was suspended over tweets suggesting that Omar should be tried for treason and hanged. In a statement about the suspension, Twitter reportedly said that it was based on “repeated violations” of its rules.

In this case, Bullock’s campaign account was created just this month. Although it is possible that tweets were deleted, thus far, the account shows only one tweet, this morning’s announcement of Gov. Bullock’s Senate campaign.

Recruiting Bullock to run is considered a major coup for Democrats, who are eager to take back the Senate majority.

Bullock previously ran for the 2020 Democratic nomination for president.