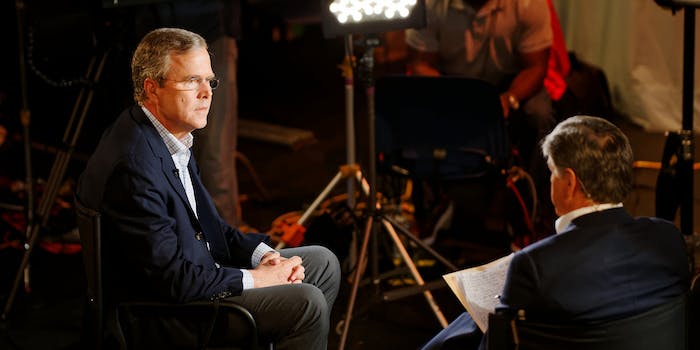 Will the former 'Colbert Report' host bring back his uber-conservative schtick?

Stephen Colbert will kick off his new late-night show with the biggest of Republican presidential “gets.”

Assuming he doesn’t book any segments before then, The Late Show will be Bush’s second late-night appearance, after a slow-jamming segment on The Tonight Show in June.

The former governor has vastly more money and endorsements than his Republican rivals and is expected to win the nomination at the party’s convention next July, but he is currently currently trailing Donald Trump in most polls. Perhaps he will discuss the blustering businessman who has defied the odds to snatch his frontrunner status when Colbert, who previously played a dyed-in-the-wool conservative on Comedy Central, asks him about the presidential race.

The former Colbert Report host is no longer parodying Bill O’Reilly, and his conversation with Bush will be the world’s first chance to evaluate his talk-show interviewing style. Will Colbert handle conservative guests with kid gloves the way fellow late-night host Seth Meyers has done on NBC‘s Late Night? Or will he try a more contentious route? We’ll find out on Tuesday, Sept. 8.

Update 10:50am CT, Aug. 11: The debut episode of the new Late Show continues to take shape. Colbert has also announced that his first musical guest, joining Bush on the Sept. 8 show, will be the hip-hop artist Kendrick Lamar.