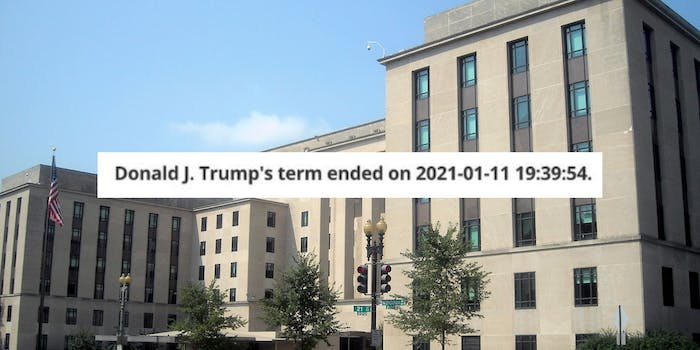 It remains unclear whether the change was intentional or not.

The website for the U.S. Department of State caused a stir online Monday after a biography page for President Donald Trump was altered to say that his term had ended.

Initially, some believed that the issue may have been a glitch. Twitter user Olivier Knox claimed that the page had apparently been altered at the beginning of the month as well.

But other users quickly chimed in to note that the biography for Pence had changed, too.

Christopher Miller, a correspondent with BuzzFeed News, announced not long after that, according to sources, the alteration had been made on purpose by a “disgruntled staffer.”

The Daily Dot has since reached out to inquire about the pages but did not receive a reply by press time.

The president’s biography page became unavailable roughly one hour after the change was noticed.

While details remain scarce, the page quickly became the subject of memes online as Twitter users began offering up alterations of their own.

The change on the State Department website comes just days after the president’s supporters stormed the U.S. Capitol, which led to the death of five people. It has sparked numerous calls for the president to resign.