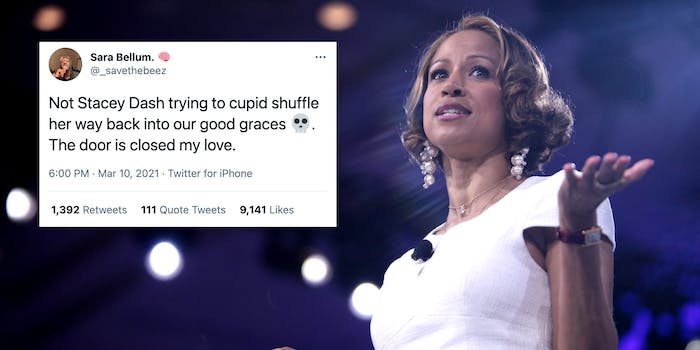 Twitter users are busy roasting Stacey Dash on Thursday after the conservative commentator announced that she would be exiting politics.

An actress best known for her role in the 1995 film Clueless, Dash earned a reputation for herself by making controversial remarks over the past several years.

Yet in a recent interview with Daily Mail, Dash denounced her former role at Fox News, where she worked between 2014 and 2016, and accused the network of casting her as the “angry Black woman.”

Dash was fired from Fox News after accusing former President Barack Obama of not giving “a shit” about terrorism.

But many appeared unwilling to accept the apology from Dash, spurring an avalanche of memes across Twitter.

Users also took aim at comments made by Dash in which she complained about being put “in some kind of box” for supporting former President Donald Trump.

Others questioned the conservative’s authenticity, pointing to a 2016 comment in which she stated that transgender people should have to “go in the bushes” instead of using public restrooms.

The conversation led the term “Stacey Dash” to become a top trend on Twitter throughout the day.

While Dash has expressed hopes of rebuilding her acting career, a significant portion of the population is unlikely to support her given her inflammatory past.

Whether Dash will be able to land any prominent acting gigs remains to be seen. Dash recently played a doctor in the low-budget anti-abortion movie Roe v Wade.