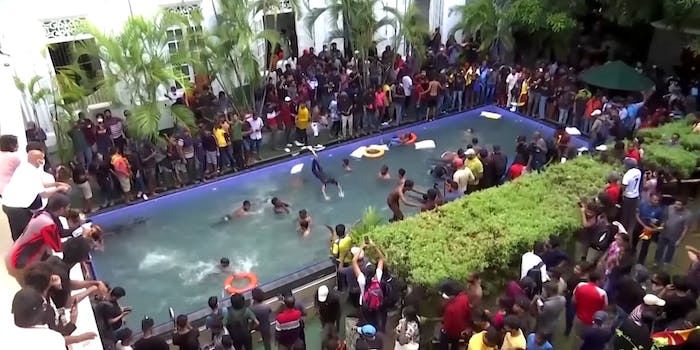 Sri Lankan President Gotabaya Rajapaksa left the country on Wednesday without resigning, the day he was expected to step down. The move comes four days after over 100,000 Sri Lankans descended on the presidential palace in Colombo, vowing to occupy it until its leaders resigned. The younger brother of Mahinda Rajapaksa, who ruled the country from 2005 to 2015, Gotabaya Rajapaksa had been in power since November 2019, overseeing the entirety of the COVID-19 pandemic and the ensuing economic crises in Sri Lanka.

After Sri Lanka defaulted on its debt in May, many locals expected Rajapaksa to step down, given the government’s contribution to the country’s economic quagmire, which ranged from corruption to gross financial mismanagement. However, with Rajapaksa staying put, many citizens felt a coordinated effort was needed to bring down the regime.

And they used a previously built social media network as the means to go about it.

With the country grappling through months-long crises, the internet was already being used by the locals to address mounting challenges. Amid crippling fuel shortages, Facebook groups shared updates on fuel supply. Apps were created to facilitate carpooling. As digital marketing professionals were increasingly using their skills to address the issues visibly abandoned by the Rajapaksa government, the virtual groundwork for the July 9 march to the capital was already laid.

“Facebook is the widest used tool in Sri Lanka. A lot of the activism, mobilization, call to action [was carried out through Facebook]. Social media is a great tool to reach out to the masses fast. From organizing protests to sharing videos and pictures from protests, everything was done on social media [by those] committed to building a new political future for the country,” activist and coordinator of The Peoples Alliance For Right To Lands Marisa de Silva said to the Daily Dot. De Silva was orchestrating protests against the government for months, using a Twitter thread for updates since March.

Anti-government protests over lack of access to fuel, food, and medicine were already going on for months. On April 9, a demonstration site called ‘Gotagogama’ (loosely translating into ‘Gotabaya go home’) was set up outside the Presidential Secretariat demanding that Rajapaksa step down. The youth-run Gotagogama website provided information and updates from the “battlefield.” Many found information about the protests through various subreddits as well.

De Silva highlighted how the July 9 march wouldn’t have been possible without online coordination through such websites and social media platforms.

“On the night of July 8, the government tried to put up an illegal police curfew. [As a result] many people were doubting whether they should venture out on the 9th. Then there was a huge social media campaign asking people to come, [telling them] that the curfew is illegal. And all of this was done within an hour of the curfew. As a result on the 9th, you had hundreds of thousands come to Colombo. Social media was critical in terms of mobilizing the people,” she said.

Lawyer and development consultant S.C.C. Elankovan shared an image with the Daily Dot that is being widely circulated on WhatsApp. Titled “Future Of The Struggle—Action Plan” the image lists the demands of protesters at Galle Face, a sea-facing promenade in Colombo.

“The action plan has been shared widely on WhatsApp and social media. I received the image on WhatsApp as well, which has been used to spark discussions through voice notes along with shared videos and images. Even the mainstream media is using footage from social media in their reporting, since their own staff is finding it difficult to cover the protests,” Elankovan told the Daily Dot.

With internet and social media at the heart of the uprising in Sri Lanka, nongovernmental organizations and human rights groups took note, catering their engagement to the tech-savvy generation. Among them is Amnesty International, which kept a close eye on the developments in Sri Lanka.

“Social media is fast becoming a very effective means of mass messaging and information sharing, so at Amnesty International, we’ve been using these mediums as well to communicate about human rights—things we’d otherwise only be saying in long reports,” Thyagi Ruwanpathirana, an Amnesty International researcher who participated in the protest, told the Daily Dot.

Ruwanpathirana regularly shared information on her social media accounts and updated a photo blog dedicated to the protest.

“I participated as a concerned citizen and was keen to actually get a sense of the energy and the mood on the ground that day. There were more people there than I had ever seen in my life. It will definitely be a defining moment for the political culture in Sri Lanka, so often seen to be entrenched in impunity. This is a message to the political elite that their time is up, and that Sri Lankans won’t stand for their mismanagement, corruption, and injustices anymore,” she added.

However, while the significance of July 9 isn’t lost on anyone, and citizens are still basking in the triumphant disposal of the Rajapaksa regime, activists and analysts are quick to point out that much needs to be done to move Sri Lanka forward.

The country awaits the new caretaker setup to pursue negotiations with the International Monetary Fund (IMF) for a bailout and set the ground for further economic reforms. But until then, citizens plan to continue to take matters into their own hands and use the internet to overcome the crisis.

“There’s been quite a bit of self-governance, since the government has been totally incapable of responding effectively to the crisis,” said Ruwanpathirana, highlighting how Sri Lankans could move forward on steady ground, given the set-up of self-reliance already built.

Many activists also insist that the country is still far from truly incorporating ethnic, religious, and gender minorities. But that too can be done with the help of the internet.

“Even though the action plan is preliminary, it largely is not representative of Tamil and Muslim minorities, women, LGBTQ, or labor rights. What is needed is conversations with different groups, demographics, and ethnicities, [to] put together a truly people’s mandate and create a far more representative group to take these demands forward. These conversations can be disseminated and amplified online,” said the activist de Silva.

The action plan being shared by the Galle Face protesters hopes to address these questions with more forward-looking answers. It ranges from the shape of the caretaker setup to the drafting of a new constitution.

“As we await the formal resignation of Gotabaya Rajapaksa, the activists are already discussing the future with members of trade unions and other stakeholders,” said Elankovan. “There is a long way to go, but the activists are using all means to help the citizens make informed decisions.”