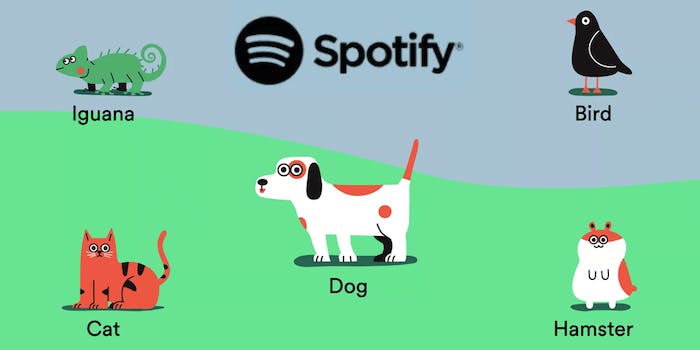 Spotify wants to make a playlist for your pet

Generate songs for your dog, cat, iguana, bird, or hamster.

Music streaming platform Spotify is offering a new service that will generate unique playlists for your pets.

Did you know 69% of pet owners sing to their pets? TBH, we’re not that surprised. These stats are barking good. 🐶 #SpotifyPets https://t.co/k2XmzrUlch

A new website known as “Pet Playlists” lets users log in and generate a series of songs for either their dog, cat, hamster, bird, or iguana.

To do so, users must first answer a series of questions that help define their pet’s personality. Options include terms such as “apathetic or curious” and “shy or friendly.” Once finished, users can add their pet’s name and photo and receive their playlist.

Spotify, which boasts more than 248 million monthly active users, says it created the new feature after surveying users in numerous countries. Those surveys found, among other things, that 71 percent of pet owners reported playing music for their furry friends.

That’s not all. Nearly one in five users even named their pets after a music artist or group. The top five artists that inspired pet names were found to be Bob Marley, Elvis, Freddie Mercury, David Bowie, and Ozzy Osbourne.

In fact, Osbourne’s dog “Rocky” even has a playlist filled with songs from heavy metal artists, such as Judas Priest, Led Zeppelin, AC/DC, Motorhead, and the prince of darkness himself, Loudwire reports.

Around eight in 10 users said they believed their pets enjoyed music, while 69 percent of users surveyed admitted to singing to their pets. Interestingly, pets allegedly prefer classical music and soft rock over anything else as well.

“The results are interesting because it shows that, more often than not, humans also think about their pets’ emotional well-being, with 70% of animal parents considering the emotional wellness of their pets daily,” the company said. “Plus, 8 in 10 people believe their pets like music, and around 46% of people feel that music is a stress reliever for their furry friends.”

The pet function is just the latest feature from Spotify aimed at setting itself apart from other music streaming services.