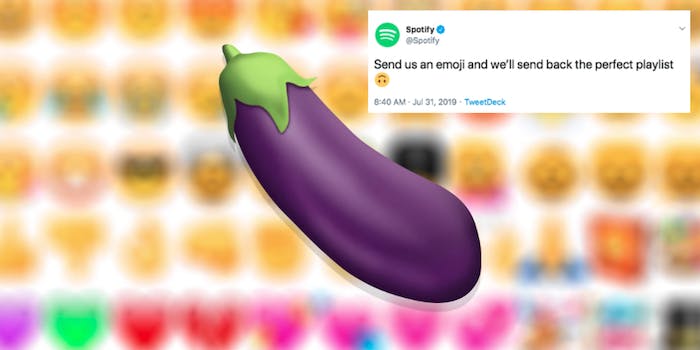 If you like the eggplant emoji, you'll receive a 'Spotify and Chill' playlist.

The Spotify Twitter account asked people to drop an emoji in its replies, and, in turn, the company would send back the “perfect playlist.”

Twitter users happily obliged. One Twitter user submitted a purple heart, and Spotify responded with a playlist, titled, “This is BTS,” as the K-Pop boy band is heavily associated with the color purple.

Not all of Spotify’s playlists were on point, though. Spanish singer Raoul Vázquez sent a Spanish flag emoji, and Spotify responded with a playlist called “Island reggae.” A playlist-emoji mashup that another user said made “no sense.”

Twitter user @ivieani submitted a queasy face, and Spotify made a playlist called “The Hangover Cure.”

Román Tejada sent in an eggplant, an emoji everyone–even Spotify, apparently–knows it’s a reference to a phallic symbol. The company aptly made a playlist called “Spotify & Chill.”

Even Target chimed in, tweeting a bullseye, and Spotify responded with a playlist called “On point.”

Head on over to Spotify to give some of these playlists a listen or to Twitter to get your own.