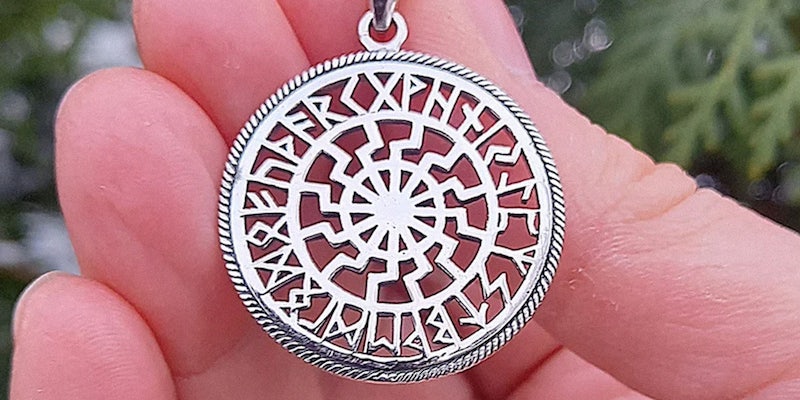 Some sellers don't even tried to hide it.

Distributed online via a Google doc, the manifesto of the Buffalo shooter was rife with hateful content and images explaining the racist logic behind his actions. Amid various conspiracy theories about the so-called “Great Replacement,” a particular image stood out: A sonnenrad.

An eerie and ancient glyph representing a “black sun,” the image is an increasingly popular symbol among the far-right and white supremacists. That’s because the symbol, which is also known as a “sunwheel” and dates back to ancient Germanic and other European tribes, has another name: The “substitute swastika.”

The symbol was endorsed by the upper echelons of the Third Reich during the Nazi’s rise to power. In the decades since, it’s filtered down to today’s white supremacist mass shooters.

But because it’s a lesser-known Nazi symbol, the sonnenrad is still commonplace on many online marketplaces. A significant number of items featuring sonnenrad imagery are available on e-commerce and craft marketplace giant Etsy, sold by independent merchants, who often don’t deny its ties to neo-Nazi groups.

A search for “sonnenrad” on Etsy returns over a thousand results, (including ads from sellers wanting to highlight their products), most of which feature a particular design of sonnenrad that was featured on the floor of Wewelsburg Castle, a major occult headquarters for Nazi leadership.

That image was ordered to be placed there by Heinrich Himmler, Adolf Hitler’s second-in-command and head of the Nazi SS.

As early as 2015, Etsy banned Nazi depictions of the swastika and other “items that promote, support, or glorify hatred.” But the company’s history with moderation is spotty. In 2016, the Daily Dot reported that swastikas were nevertheless being sold on the site.

“Until very recently, [the sonnenrad] was what I would consider a second- or third-tier Nazi or white supremacist symbol,” Dr. Mark Pitcavage, senior director at the Anti-Defamation League and an expert on extremist symbolism, said in an interview with the Daily Dot. “In the past six years or so, use of the sonnenrad by newer neo-Nazis … have greatly increased the profile and the popularity.”

The sonnenrad dog whistle spans the breadth of contemporary far-right extremism. Artists routinely use it as part of propaganda in “fashwave” and “Dark MAGA” designs, ditching the more immediately recognizable swastika.

The Christchurch mosque shooter had a sonnenrad on his backpack. The neo-Nazi Atomwaffen Division incorporated sonnenrad symbols in their propaganda. In an attack on protesters at the 2017 Unite the Right rally, the group assaulted them with a flagpole bearing a sonnenrad banner. In Ukraine, the neo-Nazi Azov Battalion include a sonnenrad in their logo. Sonnenrads are a frequent symbol in clothing and items used by extreme right-wing protesters and activists.

When mainstream sites allow hate symbols to be sold, it can often embolden far-right extremists by ensuring the ready accessibility of items for true believers. It also allows for an amplification of such symbolism and ideology, normalizing its spread from the internet’s darker corners to commonplace shopping sites.

On Etsy, the sonnenrad is not always explicitly marketed as a white supremacist signifier. Often, it is sold alongside a number of symbols, ranging from Wiccan pentacles to the valknot to Marvel logos and the Star of David.

But when reached for comment, sonnenrad retailers struggled to defend its sale. Several specifically denied that their sonnenrads were intended for use in a white supremacist political context, saying that they market their items in a “non-political” nature. Other responses ranged from declining comment to a profane screed against journalists, to the most common response, which was an awareness that it could be used by neo-Nazis and other white supremacists, but an insistence that it has other uses and meanings as well.

One seller, MydianJewellery, replied that they had received complaints about the sonnenrad’s use by white supremacists before. Another, ArdanSilver, said that they were aware their particular sonnenrad was easily confused for the one at Wewelsburg, except that “the center of their product is triangles, not rectangles.”

Indeed, that seller used triangular gaps in the middle of their sonnenrad, different from the rectangular gaps of the Wewelsburg incarnation. But that reasoning is mere hair-splitting, as there has been widespread use of triangularly-centered sonnenrads by right-wing extremists like the Buffalo shooter and the Azov Battalion.

And many sonnenrads on Etsy are intimately linked to Nazism and other strains of white supremacy. One sonnenrad seller fully embraces the Nazi linkage.

The main sonnenrad design sold on Etsy dates back to the Third Reich. At Wewelsburg, Himmler ordered the construction of a sonnenrad mosaic specifically featuring interlocking sig runes, famously known as the “lightning bolt” logo of the SS.

Wewelsburg was considered an important spiritual site for Nazi leadership. In his book Black Sun, the late Dr. Nicholas Goodrick-Clarke describes the purpose of such designs as intimately linked with the magical preoccupations of Reich leadership: “Himmler regarded the castle as … marking the center of the Germanic world, and planned ultimately to develop the whole site as an SS ‘Vatican’ of Aryan spirituality.”

But it was post-war activity that accelerated the sonnenrad’s symbolism. After the war, former SS member and leader of an occult organization of ex-Nazis Wilhelm Landig defined the “black sun” as a substitute swastika and “mystical source of energy” for the Aryan future.

On Etsy, a closer look at the comments of those who have purchased sonnenrad merchandise show an awareness of that, contrary to the intentions and statements of many sellers.

Among the usual comments about fast shipping and great value is a declaration of pride in the sonnenrad. On the page for one sonnenrad seller, a buyer says his silver sonnenrad pendant shows his “gratitude for those who came before me,” including a picture of the item draped around his neck.

A buyer from the T-shirt retailer SignsAndSymbolism said that his new, black sonnenrad T-shirt was “very based,” and another promised his purchase “will be battle tested right away.”

One retailer, in particular, EsotericEmporiumShop, doubled down on the Wewelsburg connection, selling purported chips of brick from Wewelsburg Castle at the center of sonnenrad jewelry, and hailing the pieces as great for those who are “steeped in the deeper esoteric significance of this location.” The same shop also offers a pixelated image of a pendant featuring “Heinrich H.” ”the castle’s caretaker during the 1930s and early 1940s.”

Prospective buyers could then message the seller to see the uncensored image of Himmler, away from the prying eyes of Etsy moderation.

One of the Wewelsburg castle piece necklaces was hailed as ”a great, spiritual reminder of our special heritage,” and the seller EsotericEmporiumShop was praised as one who “[a]lways makes beautiful one of a kind items for European peoples.”

Even so, the sonnenrad is a trickier symbol than most because of its real religious significance to some groups. As some sellers pointed out, the swastika was claimed by the Nazis despite its religious significance elsewhere in the world. The ADL itself is clear to point out that the “sonnenrad” label can describe a variety of sunwheels from global cultures that do not have any Nazi association and may be used by practicing non-racist Pagan groups.

Etsy’s content policies on religion make a specific carve-out for non-Nazi uses of the swastika, namely by Hindu and Buddhist religious communities. Etsy’s press office did not reply to a request for comment on its symbolism moderation.

In June of 2015, following the mass shooting of Black parishioners by a white supremacist at Emanuel AME Methodist Church in South Carolina, a national reckoning over the Confederate flag occurred. Retailers like Walmart and Amazon announced that they would no longer sell Confederate flag merchandise.

Etsy joined the ranks of these sellers shortly thereafter. In an official announcement from 2015, Etsy cited their content policies as part of this decision, stating they “prohibit items or listings that promote, support or glorify hatred, and these items fall squarely into that category.”

However, no such comment has been made regarding the sonnenrad despite its role in multiple acts of mass shootings and its long, well-documented Nazi history.

“This version’s only real association is with white supremacy,” Pitcavage said. Like the Confederate flag before it, the commonly sold Etsy sonnenrad is inextricably linked with far-right violence and racism.

And, as of right now, it’s still very easy to buy on the site.

Maxwell Fenton is an independent researcher and journalist who studies technology, conflict, and the far-right. He holds an MA in War Studies from King's College London.