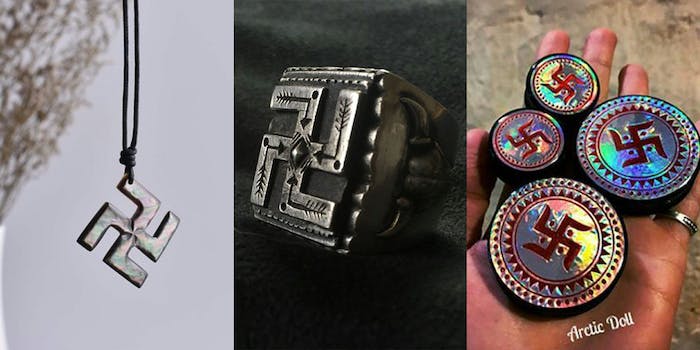 It can be shocking to see items with the symbol brazenly posted for sale.

As hate groups find more places on the internet to spread their ideologies, digital storefronts like Etsy and Amazon are contending with the probability of such groups using their platforms to buy and sell neo-Nazi paraphernalia.

While these goods aren’t explicitly marketed to hate groups like the “alt-right,” the far right-wing movement that espouses white supremacist beliefs, it can be shocking to see them brazenly posted for sale.

This swastika ring, for example, is selling for $786 from a vendor that deals in primarily silver and metal fashion accessories.

The Boston-based vendor, whose shop is called BroncoManor, says the ring is being sold as a symbol of “good luck” in line with the symbol’s Sanskrit origin, which came thousands of years prior to the Nazi Party’s adoption of the symbol.

“I am not a Nazi, I am a pure pacifist,” the vendor said in an email to the Daily Dot before stating his views on the symbol’s connections to Eastern religions. “The Nazi symbols are tilted 15 degrees, and they have a fundamental difference.”

Another Vietnam-based vendor called Saigonmade lists a “Buddhist swastika seashell” necklace, which does sit at a tilted angle when worn.

A ring and guitar pick bearing swastikas can be found in Ukraine shop VikingGoodsStore and New York-based ernestbooksales, respectively.

The guitar pick listing says in the item’s description that it’s meant to represent the “true meaning” of the swastika apart from its connection to Naziism. Initial incarnations of the symbol have been found to exist as far back as 5,000 years prior to the Nazi Party’s adoption, and it’s even been seen in some early Christian artwork. The word swastika comes from the term “svastika,” which means good fortune or well-being, and earlier versions presented the symbol as laying at a flat 90-degree angle.

The symbol came back into popularity after German archaeologist Heinrich Schliemann discovered the symbol on the site of the ancient city of Troy, connecting it with symbols found on ancient pottery in Germany. Schliemann speculated that it was a significant symbol of the Germans’ distant ancestors, inspiring other Germans to adopt the symbol as one of racial purity, and the rest is history. In modern times, it’s still commonly seen on temples in the Buddhist, Hindu, and Jainism faiths. Despite its history, there’s no skirting around what the symbol has come to represent.

“By and large, the swastika is unmistakably considered to be a hate symbol,” Southern Poverty Law Center research analyst Keegan Hankes told Reveal News. “I’m sure there are a couple situations where someone is using it in the Hindu context. But there’s no mistaking what it symbolizes and what the ideologies it’s connected to are.”

Hankes added, “There’s a market for stuff that’s not as overt as a burning cross or a swastika, because it allows people to be edgy but also wear it in their everyday lives and not necessarily totally repulse people—it’s almost like a subtle wink.”

Etsy’s public guidelines forbid the sale of items that “support or commemorate current or historical hate groups,” and includes the Nazi Party, the Ku Klux Klan, and Holocaust deniers, among others. However, Etsy does allow the sale of swastikas if they’re used in a peaceful, religious context, such as the Buddhist swastika. The use of “nazi” is permitted as an idiom, such as this “grammar nazi” flask.

Etsy also allows the sale of iron crosses, which are not as explicitly tied to the Nazi regime but do carry weighted symbolism. According to the Anti-Defamation League, a civil rights agency, iron crosses were used as military medals in 19th-century Germany. Nazis adopted the medals, incorporating swastikas into their designs.

An Etsy spokesperson told the Daily Dot that the company “cannot comment on specific items or sellers” but “that anyone can list anything on the site at any time” as long as the item doesn’t violate its guidelines.

“We do not allow items or listings that promote, support, or glorify hatred, acts of violence, or harm towards others,” the spokesperson said. “We remove such items as we become aware and enforce this policy daily.”

A cursory search through each sellers’ pages with swastika-emblemed wares indicates that many of them sell metal goods, like jewelry or decorative signs. Some sell edgier art, like skull rings, while some sell stuffed toys.

While many of these individual sellers and Etsy may see these symbols as representative of Eastern faiths, rather than the symbol of a genocidal regime, the opportunity for exploitation is still there. And it’s not just swastikas: As the alt-right has risen in popularity, so has its divergences from typical neo-Nazi symbolism. Pepe the Frog, a cartoon character appropriated by alt-right groups as their unofficial mascot, is also widely available on Etsy.

Etsy’s rules against hate group symbols has allowed it to squash such listings before, but it openly admits that its own platform isn’t policed as much as others. And it’s not far-fetched to imagine members of hate groups looking for memorabilia seeking out items like these and simply pivoting them 15 degrees to achieve the desired visual effect.

As for the individual sellers, their intentions may be in the right place (there has always been a market for Eastern religious memorabilia), but they may be selling to people who harbor nefarious intentions—and giving them one more way to spread hateful views.