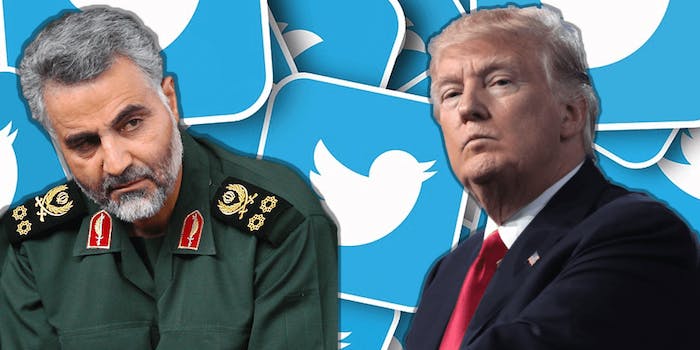 Soleimani once got into a meme battle with Trump

Prior to his assassination, Qasem Soleimani targeted Trump with memes on social media.

Iranian Maj. Gen. Qasem Soleimani and U.S. President Donald Trump found themselves embroiled in a meme war long before the military leader was placed in the lethal crosshairs of a U.S. drone.

Soleimani, commander of the country’s elite Quds Force, was killed in Baghdad early Friday in part over claims that the Iranian was planning attacks on American diplomats and military personnel.

The assassination, however, was not the first time Soleimani showed up on Trump’s radar. Although the president appeared to have zero knowledge of the general in 2015, Trump undoubtedly knew Soleimani by 2018, when the Iranian attempted to start a meme-based internet feud.

“To Iranian President Rouhani: NEVER, EVER THREATEN THE UNITED STATES AGAIN OR YOU WILL SUFFER CONSEQUENCES THE LIKES OF WHICH FEW THROUGHOUT HISTORY HAVE EVER SUFFERED BEFORE,” Trump said.

The tweet caught the attention of Soleimani, who responded to Trump several days later in a statement released by Iran’s Tasnim news agency.

“It is not in our president’s dignity to respond to you,” Soleimani said. “If you begin the war, we will end the war. You know that this war will destroy all that you possess.”

Not long after, Soleimani posted an image to his now-deleted Instagram account that showed the White House in flames.

“We will crush the USA under our feet,” text on the photo read.

Months later, in November, following the U.S. withdrawal from the Iran nuclear deal, Trump posted a Game of Thrones-inspired meme warning that “SANCTIONS ARE COMING.”

Soleimani responded with his own Game of Thrones-style meme aimed directly at Trump the following day.

“I WILL STAND AGAINST YOU,” the meme said.

Commander of the Islamic Revolution Guards Corps (#IRGC) #Quds Force Major General Qassem Soleimani responded to #US President Donald Trump’s announcement that ‘sanctions are coming’ with a Game of Thrones-inspired meme of his ownhttps://t.co/336UFrTL8E pic.twitter.com/5uh1qtQPMB

While it’s unclear who won the internet meme battle, Soleimani clearly lost the real-world war. And although memes are primarily used by political trolls, the Trump era has brought the tactic to the highest reaches of government.

In the wake of Soleimani’s death, Iran has vowed “revenge” on the U.S. In turn, Trump has ordered thousands of troops to the region as fears of an all-out war loom.