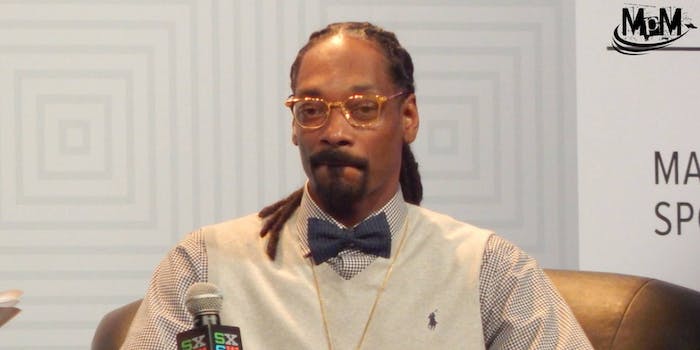 Snoop Dogg announced his support of Clinton in May 2015.

Hillary Clinton is just the opening act for Snoop Dogg.

The rapper is headlining a Democratic National Convention after-party on July 28 that will follow Clinton, the presumptive nominee, officially taking on the party’s mantle for the 2016 election, Politico reported.

The Democratic National Convention begins on July 25 and lasts for four days.

The “unity party” will happen in Philadelphia, near the convention. It’s co-hosted by the super PACs Priorities USA, the Senate Majority PAC, and the House Majority PAC.

Snoop announced his support of Clinton in May 2015.

“You know I like to be politically correct, but sometimes I’m politically incorrect,” he said on Bravo’s Watch What Happens Live at the time. “But I’ll say that I would love to see a woman in office because I feel like we’re at that stage in life to where we need a perspective other than the male’s train of thought. And just to have a woman speaking from a global perspective as far as representing America, I’d love to see that. So I’ll be voting for Ms. Clinton.”