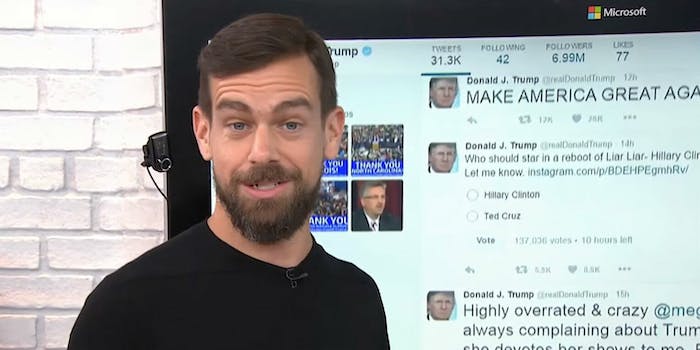 Twitter has a new method for identifying, punishing trolls

The company will use behavioral queues.

Twitter announced today a new battle plan to combat trolls who “distort and detract from the public conversation.”

The social network will start integrating behavioral signals into how tweets are presented to improve interactions between users. In doing so, Twitter thinks it can proactively police its site without waiting for people to run into and report abuse.

Behavioral signals that can identify trolls, according to Twitter, include accounts failing to confirm their email address when they sign up, a person registering several accounts at once, a person repeatedly tweeting at people they don’t follow, or joining in a “coordinated attack” with other users.

An updated algorithm will push tweets from these accounts further down the search results and replies, but won’t delete them from the platform as they don’t necessarily violate the rules. Twitter says accounts that behave inappropriately will be made “less visible” on the platform, especially on search and in public conversations, where the company sees the most abuse.

Twitter says less than 1 percent of accounts on the platform make up the majority of accounts flagged by user complaints, and a majority of troll tweets don’t violate its policies, despite having a large and negative impact on users. The goal was to create a method that would punish users who hurt the social experience but who should still be allowed on the platform.

“Because this content doesn’t violate our policies, it will remain on Twitter, and will be available if you click on ‘Show more replies’ or choose to see everything in your search setting,” it said in a blog post.

Early testing in markets around the world showed a 4 percent drop in abuse reports from search and 8 percent fewer abuse reports within conversations.

“It’s shaping up to be one of the highest-impact things that we’ve done,” Twitter CEO Jack Dorsey told the Guardian. “The spirit of the thing is that we want to take the burden off the person receiving abuse or mob-like behavior.”

Twitter will now need to ensure its algorithms don’t censure innocent posts. Rumors started spreading last month that the site was shadowbanning users who posted certain innocuous phrases like “thanks.” For those who aren’t familiar, a shadowban is when a post is hidden from others without the offending user knowing about it. Twitter told the Daily Dot that people were wrongly punished due to a glitch stemming from its renewed effort to combat spam tweets.

Twitter has played host to rampant abuse, trolling, and harassment over the years. Its long history of failing to clean up its site reached a breaking point when it was discovered that a Russian troll farm exposed around 1.4 million users to propaganda during the 2016 presidential election. Since then, the company has made several major changes, including updating its verification guidelines, revealing a new approach to abuse, and releasing a calendar that shows upcoming safety features.