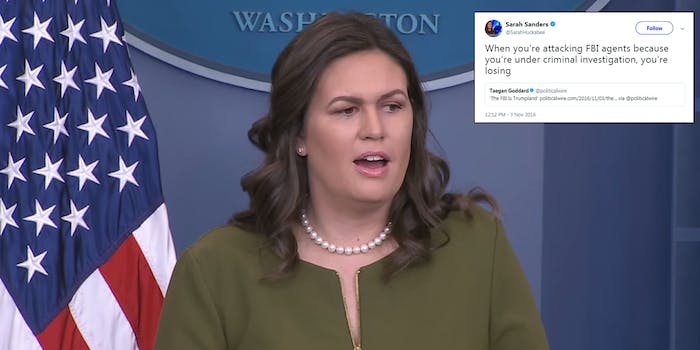 A tweet from White House Press Secretary Sarah Huckabee Sanders last year shortly before the presidential election has a bit of a different meaning after President Donald Trump blasted the FBI on Twitter over the weekend.

On Nov. 3 last year, Sanders wrote: “When you’re attacking FBI agents because you’re under criminal investigation, you’re losing,” presumably a jab at then-candidate Hillary Clinton amid the FBI making announcements regarding new findings in the investigation into her private email server.

When you're attacking FBI agents because you're under criminal investigation, you're losing https://t.co/SIoAxatCjp

But with Trump’s numerous tweets attacking the FBI on Sunday, the tweet has gained some new life.

In a series of tweets, Trump called an agent of the FBI investigating Clinton“very dishonest,” “phony,” and called the agency’s reputation “in tatters.”

“Tainted (no, very dishonest?) FBI “agent’s role in Clinton probe under review.” Led Clinton Email probe. @foxandfriends Clinton money going to wife of another FBI agent in charge,” Trump wrote in a series of tweets. “After years of Comey, with the phony and dishonest Clinton investigation (and more), running the FBI, its reputation is in Tatters – worst in History! But fear not, we will bring it back to greatness… Report: “ANTI-TRUMP FBI AGENT LED CLINTON EMAIL PROBE” Now it all starts to make sense!”

Trump made the comments amid a report that Special Counsel Robert Mueller removed an agent from his investigation into Russian election interference after it was discovered that he may have sent anti-Trump text messages.

The agent, Peter Strzok, helped with the investigation into Clinton’s private email server.  The texts were reactions to news events, such as presidential debates, according to the New York Times.

Trump also questioned whether the FBI was a “rigged system” after Michael Flynn pled guilty to lying to the agency, but did not charge Clinton amid the probe into her email server.

As Trump raged on Twitter about the FBI over the weekend, Sanders’ tweet caught the attention of some Twitter users. However, this isn’t the first time the tweet was brought back. It also happened in May, around the same time that the FBI’s acting Andrew McCabe refuted comments made by Sanders that the agency had “lost the confidence” of “rank-and-file” employees under fired FBI Director James Comey.

Seems like every day is a good day to pull out this gem. https://t.co/j8WQPnQLmA

How's that working out for POTUS Sarah? https://t.co/zk4F09z1pB