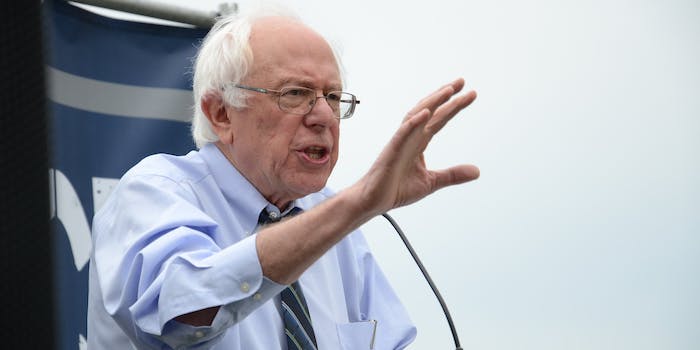 'I think it's just a dumb process which has certainly disadvantaged our campaign.'

“The Inspector General just came out with a report, it was not good for Secretary Clinton,” said Sanders, in pre-taped interview for CBS Face The Nation, which aired on Sunday. “That is something the American people, Democrats and delegates are going to have to take a hard look at.”

The IG report identified “longstanding, systemic weaknesses” in the State Department’s handling of internal communications, while singling out Clinton for the most serious infractions. The report chides Clinton for failing to surrender all of her business emails before leaving government service, a violation of policies that it says were “implemented in accordance with the Federal Records Act.”

“That is something… Democrats and delegates are going to have to take a hard look at.”

In an interview on Thursday with Univision’s California affiliate, Clinton remarked that her use of private emails “was not at all unprecedented.” Brian Fallon, a spokesman for the Clinton campaign said that the report showed “just how consistent her email practices were with those of other Secretaries.”

“I have turned over all of my emails,” she said. “No one else can say that.”

According to the IG report emails from Clinton’s office during her first few months as secretary are missing from the cache of roughly 55,000 handed over to State last year. Clinton declined to be interviewed for the report, which states that her email practices had neither been reviewed nor approved of by the department’s legal staff.

Sanders went on to dismiss the notion that the Democratic primary system was “rigged” against him.

“You have a situation where over 400 superdelegates came onboard Clinton’s campaign before anybody else was in the race, eight months before the first vote was cast,” he said. “That’s not rigged. I think it’s just a dumb process which has certainly disadvantaged our campaign.”

Update 3:47pm CT, May 29: A change was made to denote emails missing in the Clinton cache handed over to State.