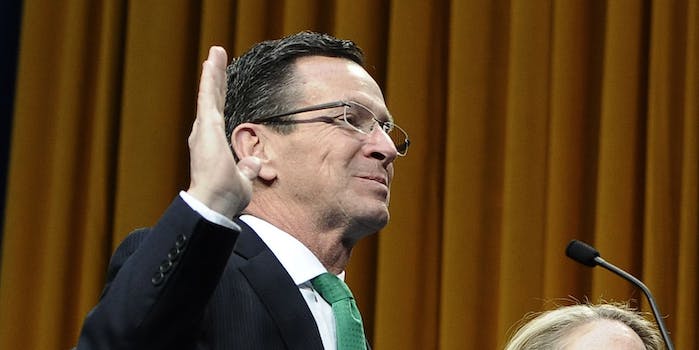 Sanders' battle with the DNC shows no signs of diminishing.

Former Massachusetts Rep. Barney Frank and Connecticut Gov. Dannel Malloy have been repeatedly accused of being “aggressive attack surrogates” for Hillary Clinton, most recently in a letter by Sanders campaign counsel Brad Deutsch to the party’s Rules and Bylaws Committee.

Criticism of Sanders by Frank and Malloy, the letter stated, “have gone beyond dispassionate ideological disagreement and have exposed a deeper professional, political and personal hostility toward the senator and his campaign.”

Frank and Malloy were elected in January as co-chairs of the DNC’s rules and platform committees, respectively. Both are nominees of Rep. Debbie Wasserman Schultz of Florida. Wasserman Schultz is the chairwoman of the DNC, whose primary opponent Sanders has openly endorsed.

In March, Frank called Sanders “outrageously McCarthyite” for demanding transcripts of Clinton speeches delivered before Wall Street executives, for which she was paid. “McCarthyite in the sense that it’s guilt by association,” Frank clarified, accusing Sanders of baselessly implying that Clinton’s speaking fees amounted to bribery. “[Sanders] complains about what she did with regards to all this money stuff,” Frank said. “Where’s the beef of that?”

Malloy, who was election head of the Democratic Governors Association in December, is admired by progressives for enacting strict new gun-control laws in the wake of the Sandy Hook massacre. In February, the governor attacked Sanders’ opposition to the Brady Handgun Violence Prevention Act, legislation of the early ’90s which sought to extend waiting periods and impose background checks on firearms purchases.

Sanders’ staff explained that the Vermont senator’s five votes against the Brady bill came as a response to the majority will of his constituents.

“Bernie’s response is that he doesn’t just represent liberals and progressives,” Anthony Pollina, Sanders former chief-of-staff, said at the time.

Malloy maintains his criticism, stating that the “Charleston loophole”— a reference to the June 2015 Charleston church shooting—should instead be known as the “Charleston-Sanders loophole.” The shooter, 22-year-old Dylann Roof, murdered 9 people with a .45-caliber handgun he procured after a three-day waiting period expired and the FBI failed to process his background check in time.