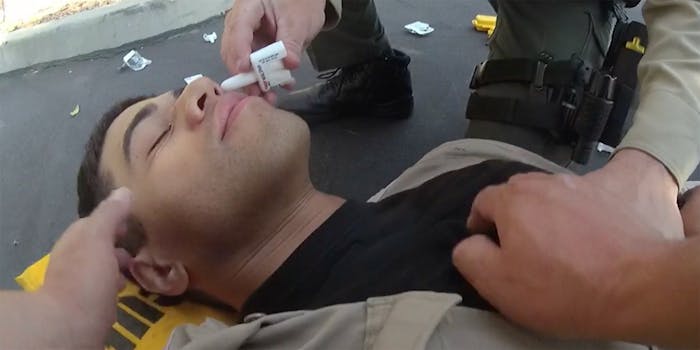 Did this sheriff's department fake an officer overdosing from fentanyl for clout?

The opioid epidemic is a very real tragedy that’s claimed thousands of lives.

But critics say that a video recently published by the San Diego County Sheriff’s Department is the opposite of real. They believe it was faked. Many are calling it copaganda—a mashup of the words “cop” and “propaganda.”

The video is of a rookie officer supposedly overdosing on fentanyl. Fentanyl is a synthetic opioid that can be up to 100 times more powerful than morphine.

The video shows an officer abruptly collapsing moments after handling a substance identified as fentanyl. His superior officer then rapidly summons an ambulance and administers naloxone. This substance is used to treat narcotic overdoses.

The deputy survives. His superior officer claims “he would’ve died in that parking lot if he was alone.”

SDCSD says the video of the “overdose” is taken from the officer’s body camera footage. The department said it doesn’t know if the officer was exposed by touching or inhaling the drug.

Several thought the officer fainted or had a panic attack. Others believe the video was staged.

Some who doubt the video’s veracity have verified accounts and identify themselves as medical professionals with experience treating addiction. One Twitter user who describes themselves as a physician and the spouse of a police officer said that touching fentanyl doesn’t cause overdose. “…[T]hat isn’t how fentanyl works.”

Some noted that experts like the American College of Medical Toxicology agree that incidental overdose such as by handling the drug is “unlikely to cause opioid toxicity.” ACMT also notes that fentanyl exposure can only occur through air in “exceptional circumstances.”

Many feel that SDCSD should be taken to task for “lying” to the public. Several suggested the department delete the tweet.

SDCSD tweeted that it stands by its video.

“We know what factually happened and our deputy almost died from a fentanyl exposure.”