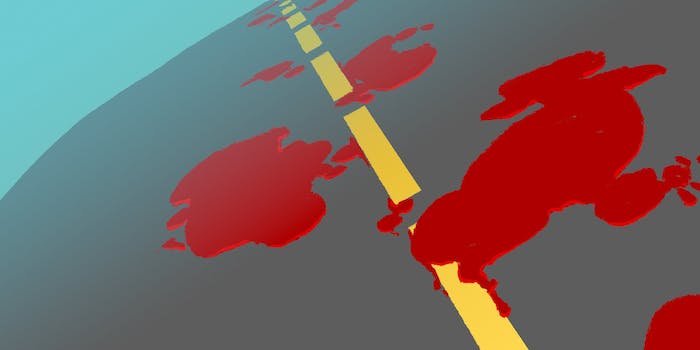 A third person 'may be outstanding.'

Two suspects are dead—one male and one female—after a mass shooting on Wednesday killed at least 14 victims and wounded at least 17 more in San Bernardino, California, according to authorities on the ground.

A third person “may be outstanding,” according to the local sheriff, while yet one more has been detained by police but it’s not clear if they were involved in the shooting. FBI representatives said “there are a number of fluid” potential leads that suggest possible links to terrorism but also warned that it was too early to discern motives.

It’s unclear if there are any more people involved. After a shootout between suspects and police followed by ongoing door-to-door searches, residents are being told to stay in their homes behind locked doors.

We are asking that all people in the SB area south of San Bernardino Ave east of Mt. View stay in their homes w/doors locked & secure

Here's the scene in #SanBernadino, a bullet ridden SUV and a bit away is what's being reported as a dead "suspect." https://t.co/jfmb1mYSPp

One officer was wounded but the injuries are not life-threatening.

The shooting began at the Inland Regional Center located about 60 miles east of Los Angeles. This is the deadliest gun violence since the December 2012 shooting at Sandy Hook Elementary School in New Town, Connecticut, saw 27 people die.

Both dead suspects were armed with assault weapons, according to authorities. An improvised explosive device is believed to be in the Inland Regional Center.

Police are searching a home nearby related to the suspects. The scene surrounding the shooting is still active and information continues to change.