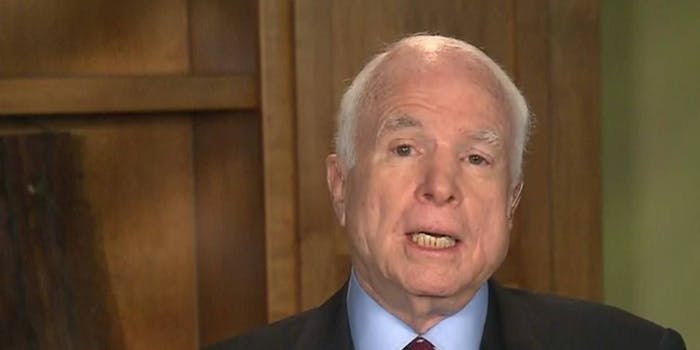 Republican and Democratic politicians both had their say Sunday.

Politicians and party officials on both sides of the aisle have been reacting this week to explosive CIA claims of Russian interference in the 2016 election. In particular, the allegations that Russian president Vladimir Putin specifically directed the dissemination of emails obtained by Russian hackers from Democratic Party officials, creating a slow-drip of negative headlines for former Secretary of State Hillary Clinton that ostensibly hurt her performance on Election Day.

On the Sunday morning show circuit, Arizona Sen. John McCain went further than many in his party have gone. In an interview with CNN’s Jake Tapper, McCain lambasted Russia’s alleged tampering as a direct threat to the survival of American democracy. He also blasted the reaction of the American government, calling it “totally paralyzed” against the hacks.

While calling for a bipartisan select committee to investigate the hacking claims, McCain placed Russian interference in the U.S. election alongside the destruction of Syria as indicators that the post-World War II global order is being challenged and upended around the world.

“This is a sign of the possible unraveling of the world order that was established after World War II,” McCain said. “We are starting to see the strains and the unraveling of it, and that is because of an absolute failure of American leadership. When America doesn’t lead, a lot of other bad people do, and that’s why we’re seeing this slaughter in Aleppo that breaks your heart.”

Tapper then asked McCain whether he was also concerned about President-elect Donald Trump’s attitude toward the Russia hacking story, specifically his consistently pro-Putin rhetoric. McCain insisted that he believed “reality is going to intercede at one point or another.”

He also cited the presence (pending Senate confirmation) of retired general James Mattis as a potential influence in taking Russia more seriously as a geopolitical foe and called for renewed focus on Russia’s advantages in “cyber-warfare.”

Current Republican National Committee chairman and incoming White House chief-of-staff Reince Priebus also responded to the hacking story on Sunday morning. Appearing on Fox News Sunday, the freshly-minted Trump administration official claimed his boss would accept findings that Russia had interfered on his behalf if multiple intelligence agencies put together a comprehensive report. “I think he would accept the conclusion if they would get together, put out a report, and show the American people they are on the same page,” Priebus said.

He also argued there was no evidence the hacks were decisive in the outcome. “There’s no evidence that shows the outcome of the elections was changed by a couple of dozen John Podesta emails,” Priebus said. In reality, Podesta had far more than “a couple of dozen” emails stolen— more than 30,000 emails were taken from his account and were then slowly released by Wikileaks over the course of the final month of the campaign.

Podesta himself, for his part, was unsubtle about just how damaging those emails were. Appearing on Meet The Press with NBC’s Chuck Todd, Podesta called for a thorough investigation of the Russia allegations and notably refused to affirmatively state that the 2016 election was “free and fair.”

“Look, I think the Russians clearly intervened in the election, and I think that now we know that both the CIA, the Director of National Intelligence, the FBI all agree that the Russians intervened to help Trump,” Podesta said.

Podesta also noted Clinton’s nearly 3 million vote advantage in the national popular vote. Podesta has taken a decided hard line on these issues in recent weeks, calling for presidential electors to receive intelligence briefings in advance of casting their votes on Dec. 19, a request that has gone unfulfilled.

Interim Democratic National Committee chair Donna Brazile also weighed in on the matter, speaking to ABC News’s Martha Raddatz about Russia’s role in the campaign. Brazile’s reputation was marred badly as a result of the DNC email hacks, which revealed that she leaked some primary debate questions to the Clinton campaign while she was a paid political analyst for CNN.

While Brazile’s main points were similar to what other Democratic officials have argued—that the election was tainted by foreign interference, even though whether Clinton would’ve won absent them is impossible to say—she made some news Sunday by directly and flatly contradicting President Obama’s version of events as he stated in his final press conference of 2016.

Obama insisted that following his demand that Putin “cut it out” with pro-Trump election interference in September, no further tampering was found. Brazile contradicted that claim.

“No, they did not stop,” Brazile said. “They came after us absolutely every day until the end of the election. They tried to hack into our system repeatedly. We put up the very best cybersecurity infrastructure to stop them, but they constantly came after us.” Brazile, though, repeatedly refused to directly criticize Obama’s response.

The incoming president, for his part, has insisted that U.S. intelligence agencies have “no idea” who committed the hacks, and he has argued that the entire story is “just another excuse” to distract from his victory.