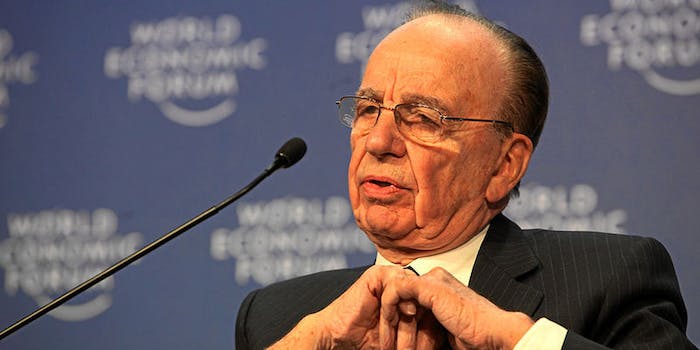 'Give me (some of) your tired, your poor, your huddled masses yearning to breathe free.'

In the wake of last week’s deadly terrorist attack on Paris, Republican governors of at least 25 states have vowed to stop Syrian immigrants from settling among their constituents.

Moves to block Syrians fleeing a bloody civil war that’s already claimed the lives of hundreds of thousands of people are rooted in fears that the Paris attack was carried out, at least in part, by individuals who had entered Europe by posing as refugees. While conservative politicians have expressed concern about Syrian refugees, others have drawn the curtain of concern far more broadly.

Murdoch’s statement echoes that of 2016 Republican presidential candidate Jeb Bush, a former Florida governor, who told CNN’s State of the Union on Sunday that the U.S. “should focus our efforts as it relates to refugees on the Christians that are being slaughtered.”

Syria’s population is about 90 percent Muslim and 10 percent Christian. Even accounting for the difference in population size, the religious breakdown of Syrian refugees settling in the United States is slanted towards Muslims. “While there may be higher numbers of Muslims from Syria who have come to the U.S. than Christians,” Refugee Council USA Associated Director Shaina Ward explained to Politifact, “this is not reflective of any policy making it easier for Muslims and harder for Christians.”

In the period since World War II, the United States has typically taken in about half the world’s aggregate refugee population. But the U.S. has only allowed in about 1,500 Syrians since the conflict began four years ago. The Obama administration has indicated that it intends to accept some 10,000 Syrian refugees over the course of the next year.

Murdoch’s sentiment was echoed by Senator Ted Cruz (R-Texas), who is currently seeking the 2016 Republican nomination for president. Cruz has even gone as far as pledging to introduce a bill prohibiting all Muslim Syrian refugees from entering the U.S., while keeping the door open for Christians.

Of the 63 domestic terror attacks carried out between April 2009 and February 2015, only five were perpetrated by Muslims.

“There is no meaningful risk of Christians committing acts of terror. If there were a group of radical Christians pledging to murder anyone who had a different religious view than they, we would have a different national security situation,” Cruz said over the weekend during a campaign event in South Carolina, according to the Washington Post.

In the decade and a half since 9/11, terrorism in the United States has largely become synonymous with attacks carried out by Islamic fundamentalists. However, according to a report complied by the Southern Poverty Law Center, of the 63 domestic terror attacks carried out between April 2009 and February 2015, only five were perpetrated by Muslims. The overwhelming majority were carried out by white Christians.

On the other side of the aisle, leading Democratic politicians were quick to dismiss a religious test as contrary to the values on which the country was founded. Speaking at the G-20 summit in Antalya, Turkey, on Monday, President Barack Obama labeled the idea un-American.

“When I hear folks say that, ‘Well, maybe we should just admit the Christians but not the Muslims,’” Obama said, “when I hear political leaders suggesting that there would be a religious test for which person who’s fleeing from a war-torn country is admitted, when some of those folks themselves come from families who benefited from protection when they were fleeing political persecution, that’s shameful.”

That sentiment was pithily summed up in a tweet by Democratic presidential front-runner and former Secretary of State Hillary Clinton:

We've seen a lot of hateful rhetoric from the GOP. But the idea that we'd turn away refugees because of religion is a new low. -H

According to a recent poll, conducted in the days following the Paris attack, Americans themselves are deeply are just as divided on the question of accepting Syrian refugees. The poll found that 52 percent of respondents “think nations which accept refugees fleeing the strife in Syria are less safe” than other refugees.