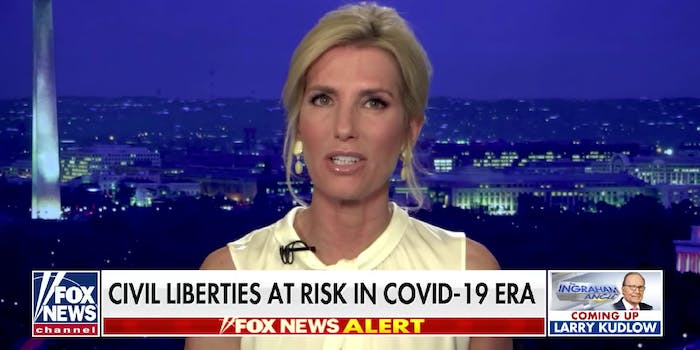 Laura Ingraham posted a photo of the essential worker clipping their fingernails.

Fox News host Laura Ingraham attempted to belittle an essential worker of a Walmart in Georgia.

Ingraham tweeted out a photo of the employee clipping their fingernails to her over 3 million followers on Thursday night.

“Attention Shoppers! Nail clipping in Aisle 8! But at least he has a mask on…Griffin, GA. (h/t viewer and fellow shopper),” Ingraham tweeted. It’s unclear if Ingraham took the photo herself or had it sent to her by a third party.

Ingraham was immediately called out for attempting to put an essential worker on blast during a pandemic.

Ryan Saavedra, a writer for right-wing site the Daily Wire, even urged Ingraham to “delete this ASAP” in a since-deleted response.

The Daily Dot on Friday afternoon was able to contact several store employees of the Walmart Supercenter in the town of Griffin, Georgia, where the Fox News host claims the photo was taken.

“No one should be taking pictures in a Walmart, that’s policy,” the co-manager said before reiterating that no one should take a photo in the store without first getting the store’s approval.

The co-manager declined to comment on the specific incident and if nail-clipping also violates store policy. The Daily Dot has sent multiple requests for comment to Walmart’s corporate office.

The Daily Dot has also reached out to Fox News.