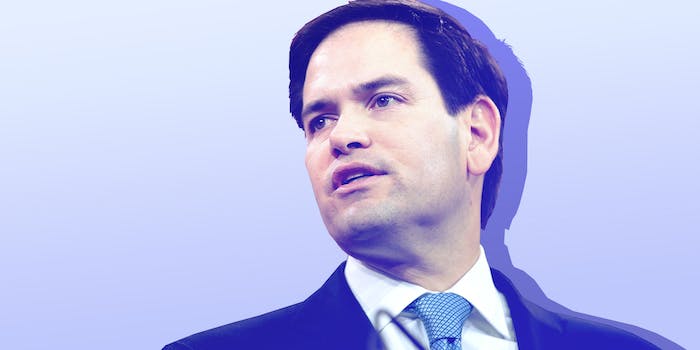 Donald Trump clashed with Marco Rubio in the last debate before Super Tuesday.

In the last Republican presidential debate before Super Tuesday, Sen. Marco Rubio made it his mission to attack frontrunner Donald Trump with everything he had.

Attacking Trump head on, Rubio said, “If [Trump] builds the wall the same way he built Trump tower, he’ll be using illegal immigrant labor to do it.” Rubio was referencing an incident in 1990 where Trump paid $1 million in fines for using undocumented workers from Poland to build Trump Tower.

Rubio continued to attack Trump, mentioning four times that his business have filed for corporate bankruptcy, and he threw in a pending civil fraud suit surrounding Trump University, an online business school owned by the real estate magnate.

Rubio, the junior senator of Florida, also went after Trump for manufacturing his Trump brand of shirts and ties in China and Mexico, asking, “Why don’t you make them in America?” Trump fell back on one of his default lines, saying that China manipulates and devalues their currency, making it tough for American businesses to compete with overseas competition.

Trump shot back, saying he turned $1 million into $10 billion. “Nah, you never made that much money,” Rubio quipped.