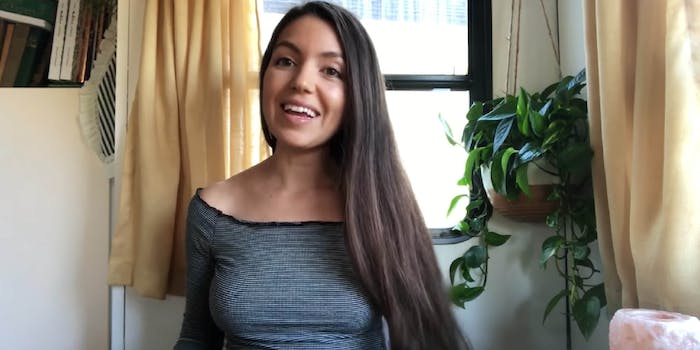 She believes a coronavirus hospital ship is being used to house children who were rescued from the clutches of the Deep State, among other theories.

A growing number of Instagram influencers are sharing far-right conspiracy theories related to the coronavirus.

Popular accounts known for lifestyle and parenting content, according to BuzzFeed News, have increasingly begun delving into bizarre topics surrounding the global pandemic.

Many of the conspiracies are linked to QAnon, a mythical government figure that informs conservatives about President Donald Trump’s secret battle against the Deep State by leaving vague messages on forums known mostly for trolling.

Followers of QAnon are constantly moving goalposts in order to keep the conspiracy alive. Just in regard to the coronavirus, many Q believers at first claimed the virus wasn’t even real. But once the reality of the pandemic set in, the new theory became the virus was actually being used as a cover for “The Storm,” a series of mass-arrests against global elites that have been just around the corner now for several years.

Rose Henges, known on Instagram as @roseuncharted, is just one of the Instagram influencers who have begun wading into the Q conspiracy. Henges describes herself as a Christian mom blogger and currently has more than 75,000 followers.

Henges recently shared a photograph on Instagram of Trump and members of his administration praying alongside a caption related to Q. The post claims, without evidence, that Trump became president to fight against child trafficking carried out by the Deep State.

“Perhaps he could not stomach the thought of children being kidnapped, drugged, and raped while leaders/law enforcement of the world turn a blind eye,” the caption says.

The blogger also shared an image of the hospital ship USNS Mercy in Los Angeles, which recently arrived to help in the fight against COVID-19. But in the world of QAnon, the ship is actually being used to house children who were rescued from the clutches of the Deep State. Or, according to others, the ship’s purpose is to hold imprisoned Deep State members who will soon be sent to the Guantanamo Bay prison in Cuba on orders of the president.

The unfounded claims may have led a Los Angeles train engineer on Wednesday to purposely derail his locomotive at high speed in an attempt to reach the ship. The man told federal investigators that he “thought that the ship was suspicious” and didn’t believe it was actually being used to address the outbreak.

“You only get this chance once. The whole world is watching,” the man said, according to the arrest affidavit. “I had to. People don’t know what’s going on here. Now they will.”

The Navy Hospital Ship Comfort, which has been docked outside of New York City as part of the coronavirus relief effort, has also had similar conspiracies levied at it by Q believers.

Ivy Carnegie, another Christian influencer focused on parenting and wellness, has likewise weighed in on the absurd coronavirus claims to her 87,000 followers.

Numerous Instagram Stories from Carnegie over the past several days have discussed human trafficking linked to the Q conspiracy. Speaking with BuzzFeed News, Carnegie stated that she had been getting information about the issue from “all over.”

“Coronavirus set aside, there’s a lot of things happening with human trafficking right now,” she said. “It’s an exciting time for those that have been praying for things to change.”

Jalynn Schroeder, a beauty and fashion influencer with 49,000 followers, also late last month revealed how she became invested in QAnon. In a post that included numerous Q-related hashtags, Schroeder explained how “one week ago today, my eyes were opened.”

Schroeder even has six Instagram Story highlights pinned to her profile discussing “theories” related to Q.

The numerous profiles reveal how the conspiracies, much like the coronavirus, continue to spread. Other popular coronavirus-related conspiracies include the belief that hospitals are lying about an influx of patients and that death statistics are purposely being inflated.