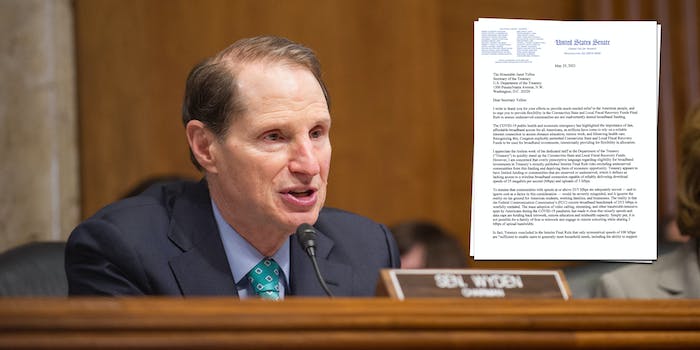 Wyden wants anywhere that doesn't have 100 Mbps symmetric service to be eligible.

Sen. Ron Wyden (D-Ore.) is urging the Treasury Department to allow for funds from the American Rescue Plan to go toward a wider array of people needing broadband.

Currently, the standards in Treasury Department’s interim rules “risks excluding underserved communities from this funding and depriving them of economic opportunity,” Wyden said in a letter to Treasury Secretary Janet Yellen.

The American Rescue Plan directed the Treasury Department to disperse funding to states, territories, and tribes to cover broadband infrastructure.

Those interim rules define the unserved or underserved areas as those who don’t have access to internet speeds of 25 Megabytes per second (Mbps) for downloading and 3 Mbps for uploading. Instead, the Treasury Department should allow funding to go to any community that has symmetrical service below 100 Mbps, Wyden said.

“To assume that communities with speeds at or above 25/3 Mbps are adequately served—and to ignore cost as a factor in this consideration—would be severely misguided, and it ignores the reality on the ground for American students, working families, and businesses,” Wyden wrote, adding: “Simply put, it is not possible for a family of four to telework and engage in remote schooling while sharing 3 Mbps of upload bandwidth.”

Wyden said the Treasury Department’s final rule should clarify that underserved locations would include “anywhere affordable, reliable, broadband of at least 100 Mbps symmetric is not available.”

There’s been a push to raise what the minimum standard is for broadband. Since 2015, the Federal Communications Commission (FCC) has defined that standard as 25/3 Mbps.

Many lawmakers want to see that standard rise to 100 Mbps symmetric. In March, a group of four senators wrote to the FCC asking for the agency to update that standard. Meanwhile, Acting FCC Chairwoman Jessica Rosenworcel has advocated for the 100 Mbps standard in the past.