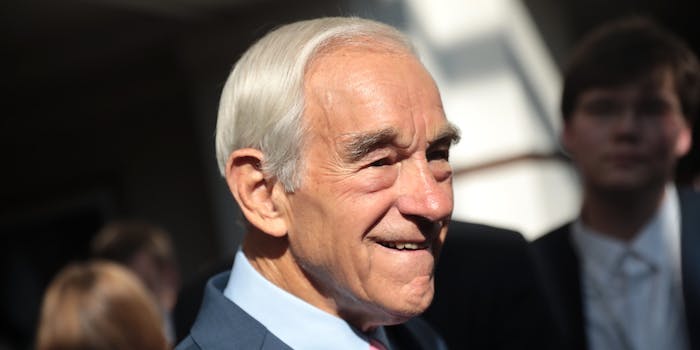 The former congressman began struggling to speak during a live stream.

Former Republican Congressman Ron Paul was hospitalized in Texas on Friday after suffering an apparent medical emergency while on a live stream.

While on a live stream, the 85-year-old Paul, a vocal libertarian and former presidential candidate, suddenly began struggling to speak and slurring words.

Footage of the disturbing moment began circulating online, leading many to suspect that Paul may have suffered a stroke. It is unclear exactly what happened, with another person on the live stream reacting to Paul and looking unsure of what occurred.

A report from Fox News shortly after stated that Paul had been taken to a hospital for “precautionary” reasons.

Fox News anchor Harris Faulkner also reported that Paul was “lucid and optimistic” at the hospital.

The former congressman’s Twitter account posted a photo of Paul in a hospital bed on Friday afternoon saying that he was “doing fine.”

A number of politicians, including Sen. Ted Cruz (R-Texas) tweeted out support for the former lawmaker.

“Heidi & I are lifting up in prayer @RonPaul and @RandPaul and their family. For many decades, he has been an extraordinary warrior for Liberty. May God’s healing hand be upon Dr. Paul, and may God’s Peace and Grace be upon the entire family,” Cruz tweeted.

The Daily Dot has reached out to the Ron Paul Institute for comment. We’ll update this story if we hear back.