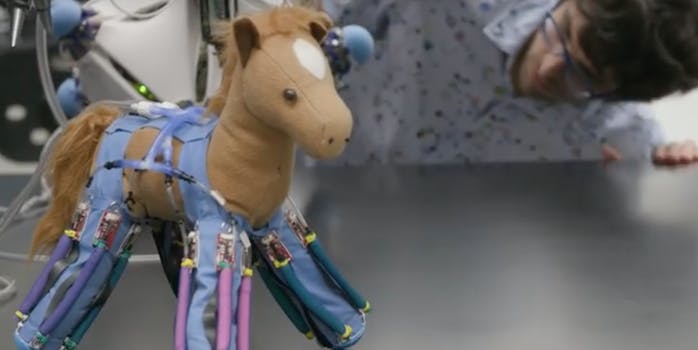 Stuffed animals can now come to life, thanks to soft robotics

It could have useful real world applications in disaster areas.

Literature, Hollywood, and the human imagination have long perpetuated the idea that stuffed animals can come to life. Thanks to a “robotic skin” developed by Yale researchers, that’s actually possible—in the physical sense, at least.

Inspired by developments made at NASA, Yale assistant professor of mechanical engineering and materials science Rebecca Kramer-Bottiglio created a type of robotic skin made of elastic sheets, sensors, and actuators (motors) which can be controlled remotely.

The technology isn’t just the stuff of dreams—or nightmares, depending on what you think of stuffed animals who’ve been granted the gift of movement. Kramer-Bottiglio hopes that this robotic development could prove useful in disaster areas.

“A designer could quickly construct a robot using the robotic skins wrapped around whatever deformable materials they have access to and stick a camera on it, and then deploy the robot for exploration of small or dangerous spaces,” Kramer-Bottiglio told NBC News.

Roboticists have been working on so-called “soft robots” and mechanical skins in various ways over the years. Researchers at Harvard University developed an autonomous soft robot styled after an octopus back in 2016. Created using a mix of mechanical engineering, microfluidics, and 3D printing, this “Octobot” used liquid and gaseous hydrogen peroxide as fuel for its movements. And in 2015, MIT graduate student Bianca Homberg developed a soft robot-style handmade of silicone that could be used to handle items that more traditional robot hands have trouble grasping.

This Yale research goes further, however, in showing the versatility of soft robotics. It’s a system that could be strapped to a wide variety of different materials and structures to enable movement. Kramer-Bottiglio and her team plan to test deformable clay in the future, as well as using 3D-printed components in its construction, which could help make the technology more practical for deployment in remote areas.