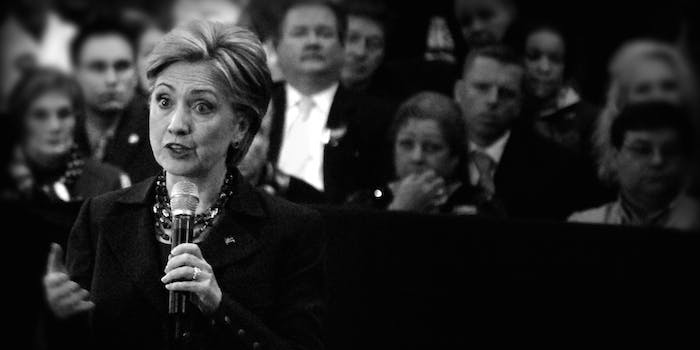 Don't watch this alone or in the dark.

In case you live under a rock… on the moon… of another planet… in galaxy far, far away: Hillary Clinton is running for president in 2016.

As is customary, Clinton’s not-yet-official campaign unofficially announced that she would announce her campaign this Sunday, officially. This comes as a big surprise to no one, especially the Republican National Committee, which released on Friday a never-before-seen anti-Clinton advertisement.

The 30-second spot features a Hillary-esque character walking in slow-motion toward a podium, while voices panning dramatically left and right air criticisms of her past. Honestly, they could be reading the assembly instructions for an IKEA wall cabinet, because it’s really all about that subversive background piano.

Suddenly, there’s a high-pitched shriek—the kind of noise you’d expect to hear if a pasty child with too much eye shadow began crawling out of your TV set—followed by the sound of rain, pitched ever so slightly up, as if it were dripping in some shady, abandoned warehouse.

You may feel a lingering suspicion toward other people’s motives for several minutes after watching the video. It passes.

Naturally, Fox News was determined to let everyone know a political commercial had been aired exclusively on its network, so it tweeted. But those guys basically missed the entire point, neglecting to hashtag #StopHillary, which can been seen very clearly at the video’s climax.

Not sure what this is about:

This dilapidated mail box is really all you need to know about Hillary Clinton:

And, what the heck, why not sell some bumper stickers while we’re at it:

The RNC ad was also aired multiple times by Fox News on different shows throughout the day, gratis. It’s almost as if Fox brass didn’t want the RNC to pay for it. But since Clinton’s campaign war chest was estimated in the New York Times this morning at $2.5 billion, who can really blame them?