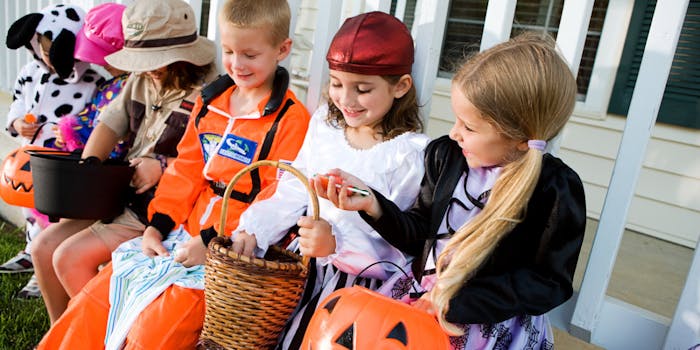 The spookiest part of Halloween this year was the reminder that Amazon is always watching. In a recent blog post and series of Instagram stories, Ring, a home surveillance system owned by Amazon, revealed that it recorded millions of trick-or-treaters this Halloween.

Ring published a blog post on Monday sharing data collected from its surveillance systems on Halloween. According to the post, Ring doorbells were rung 15.8 million times on Halloween. Ring said that was a six-time usage jump from the previous Thursday. Ring also revealed that the busiest time for trick-or-treating was 6:29 p.m. on the East Coast and 6:51 p.m. on the West Coast. The busiest cities for Ring doorbells were Houston, Miami, and San Antonio.

Alongside statistics, Ring also posted videos of trick-or-treaters. One video Ring shared showed a father telling his children to follow the honor system and take just one piece of candy. Another video showed trick-or-treaters getting scared by a giant spider after ringing a doorbell.

Ring’s blog post reads “it’s fun to see so many neighbors capture precious moments on their Ring cameras. But at Ring, we’re also happy to know that our devices help keep neighborhoods safe and allow people to feel more confident that they are secure during the holidays.”

Ring encouraged users to submit funny or cute videos captured on their surveillance systems and told users where they could submit this footage.

Ring has been called out before for sharing video footage with the public and with law enforcement. However, according to Ring’s terms of service, the company has the right to use video shared by its customers. Ring has shared video content with the public for advertising purposes, and on Neighbors, the neighborhood-watch app Ring launched in 2018.

Ring’s terms of service also include a condition preventing customers from suing Ring in public court. The terms of service mandates issues are resolved privately, so if there were privacy disputes with Ring, it is unlikely the public would be aware.