There’s nothing more American than giving back on Thanksgiving—unless the person being generous is Barack Obama.

A recent poll found that a significant portion of Republicans disapprove of the president’s decision to pardon two turkeys in 2014 rather than the traditional one turkey.

Up to 38 percent of Republicans disagree with President Obama’s decision to pardon two Thanksgiving birds, named Macaroni and Cheese, instead of the customary one, Public Policy Polling revealed on Monday, while only 11 percent of respondents support the president’s order.

According to the pollsters, the opposition likely indicates that many Republicans are reflexively against anything the president says or does. 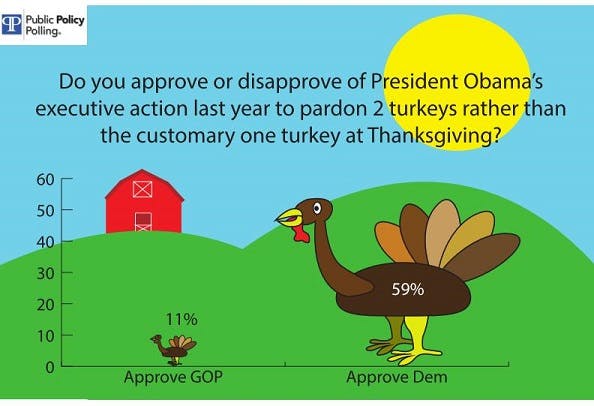 “That’s a pretty clear sign that if you put Obama’s name on something GOP voters are going to oppose it pretty much no matter what,” PPP wrote in its release.

By a wide margin, voters also declared that Donald Trump would be the 2016 presidential candidate most likely to say something inappropriate at the dinner table and ruin Thanksgiving.

In case you’re wondering why anyone bothered to ask about this issue, PPP is known for its quirky polls. In 2011, the institute reported that only 19 percent of Republicans thought Obama would be raptured during the Second Coming of Christ. They also found that 27 percent of Americans were in favor of a new tax on hipsters because they’re “so annoying.”

The origin of the presidential turkey pardon is a matter of dispute. The first mention of a “pardon” by name, however, has been traced back to the 1980s, according to a 2007 Washington Post investigation, “The Stuffing of Historic Legend.”

President Harry Truman is widely credited for founding the annual tradition of turkey mercy in 1947; this has been disputed by his own archivists at the Harry S. Truman Presidential Library and Museum in Independence, Mo., however, who’ve found no records to support the claim.

It has even been said the turkeys have President Abraham Lincoln, the Great Emancipator, to thank for their freedom. One Christmas, Lincoln’s son Tad argued in favor of the family dinner’s right to life, or so the story goes. The doting father decided to spare the bird.

“Softie that he was,” the Post writes, “Lincoln also pardoned his son’s toy soldier, Jack, a time or two, after he was court-martialed for falling asleep at his post.”

While artfully deflecting questions about whether Oliver North would receive a presidential pardon in the wake of the Iran-Contra affair, President Ronald Reagan joked to reporters in 1987 about pardoning “Charlie,” a White House turkey already en route to a petting zoo.

Before Reagan, President Kennedy is said to have spontaneously pardoned a bird in 1963 by joking: “Let’s just keep him.” The turkey was wearing a sign that read, “Good Eatin’ Mr. President.”

While Democrats and Republicans may be divided over turkeys this year, the PPP poll found one glimmer of hope for bipartisanship in America: A majority of voters in both parties say that it’s way, way, way too early for people to start playing Christmas music.

Photos via Chrisbkes/Flickr (CC BY 2.0) and Elizabeth Cromwell/Wikipedia (CC BY SA 3.0) | Remix by Fernando Alfonso III