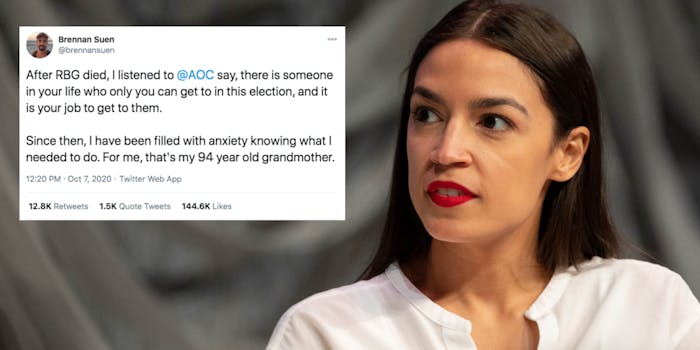 'She told me that I'm the love of her life and that she would not break her promise.'

After Supreme Court Justice Ruth Bader Ginsburg’s death, Rep. Alexandria Ocasio-Cortez (D-N.Y.) urged her Instagram followers to try and “get through to” Republicans and nonvoters in their lives. “I need you to pick up the phone. … I need you to get through to the person that only you can get through to,” she said at the time. For Brennan Suen, that person was his 94-year-old Republican grandmother.

In a now-viral Twitter thread posted on Oct. 7, Suen shared the story of how he convinced his grandmother to switch parties for the very first time.

Suen said he decided to call his grandmother, who “has always been the greatest ally” to him, “after weeks of hesitation” and after “SCOTUS justices indicated their intent to overturn Obergefell.” In the landmark 2015 case, Obergefell v. Hodges, the Supreme Court ruled that same-sex couples have a constitutional right to marry.

Suen told the Daily Dot his “grandmother is the most loving person in (his) life, but calling her about this felt as scary and emotional as coming out.”

In the thread, he recalled calling her while crying, something he has never done before. “I told her the Republicans are trying to take away our right to marry, adopt, access health care,” Suen tweeted. “I told her a vote for Republicans was a vote that would harm me and my future. I told her I was scared.”

Suen, a researcher who focuses on misinformation about LGBTQ issues, said the last four years, during the presidency of Donald Trump, has been “unbearably difficult” for him.

He said his grandmother—then and there—pledged to vote for Democratic presidential nominee Joe Biden and State Sen. Joyce Elliott (D-Ark.), who is attempting to unseat U.S. Rep. French Hill (R-Ark.), a three-term incumbent.

“She told me that I’m the love of her life and that she would not break her promise,” Suen wrote. “I am still crying.”

The story eventually made its way to the person who inspired it all. Ocasio-Cortez called the story “beautiful” on Twitter and said she was “proud” of both Suen and his grandmother.

Suen acknowledged, however, that “not everyone is lucky enough to have family who is willing or able to change their minds on this.” “The feeling that a family member could vote for someone who would actively harm you and your community can really hang over your heart,” he told the Daily Dot.

While some users are replying to the thread with stories about how they were unsuccessful in convincing their loved ones to switch parties, others had similar experiences to Suen’s. Suen told the Daily Dot he was “overwhelmed” when he saw the responses he was receiving.

“I was surprised to see how many people it resonated with, and absolutely inspired to see that many other people had engaged in those same tough conversations,” he said. “But in some ways, I am not surprised, because I think when Americans see what is at stake this election—the faces of people who will be harmed—they understand that we need to elect Democrats up and down the ticket to protect their loved ones.”

In his final post on the thread, Suen urged people who read his story to also call those in their lives and remind them of “what’s at stake.”

“There is someone out there who only you can get to. And their decision will mean the world to you,” he wrote.

Suen told the Daily Dot that people are already reaching out to him for advice and telling him that reading his story “was the final push for them to do the same.” Suen said that “it has been truly moving to see that” he has inspired others, just as Ocasio-Cortez inspired him.