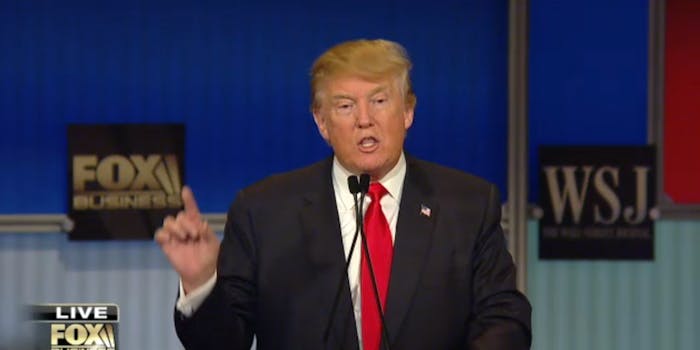 When were the Republican presidential candidates telling the truth?

When were the Republican presidential candidates telling the truth and when did they get it wrong during Tuesday night’s debate?

A total of 12 White House hopefuls took the stage Tuesday in a debate that ranged from the economy to terrorism, China to ISIS, and from the Trans-Pacific Partnership to the Iran nuclear deal.

Here are our fact-checks on what the candidates said from Tuesday night’s debates.

Huckabee’s statement on American manufacturing jobs being lost is true. There is, however, an important caveat that he didn’t mention—the numbers are up since 2010, reversing a precipitous decline.

Gov. Chris Christie, who focused in on Hillary Clinton all night, bemoaned Democratic plans that he says will increase your taxes to 90 percent.

Sanders, meanwhile, has said no such thing.

He has pointed out that America’s very richest citizens were taxed at a marginal rate of 90 percent under Republican president Dwight Eisenhower.

While Huckabee repeatedly argued that America’s economy was on a long-term economic downward trend, he pointed to stagnant wages for American workers.

It’s true. Adjusted for modern dollars, Americans haven’t had a raise in decades. Gov. Jeb Bush noted that most of the jobs created since the U.S. economy began recovering from the recession have been lower-wage jobs. That’s accurate.

Donald Trump, the frontrunner of the race, struck a more dire tone when he said the country is losing jobs like never before.

That’s not accurate. The U.S. is gaining jobs, first of all. In the larger picture, American unemployment was higher during the Great Depression and numerous other periods in history since.

As evidence of his claim that the American economy is shrinking for most people, Gov. Jeb Bush said that more small businesses close every month than open.

U.S. Small Business Administration statistics show that, in fact, the numbers of small businesses opening and closing every year are just about equal: About 10-to-12 percent.

When asked about those at the very bottom of the wage ladder, Dr. Ben Carson said he would not raise the minimum wage if elected.

The reason, he argued, was that the minimum wage actually increases unemployment. Research shows that claim is false.

Attempting to flip a common trope on its head, Sen. Rand Paul (R-Ky.) said that Democrats are worse on income inequality than Republicans, pointing to cities as evidence.

It’s true that the most unequal cities tend to be Democratic-led and the most equal are Republican. The question, then, is can we credit or blame mayors for a city’s economy?

“No—many factors play into a city’s economic success,” Politifact reported. “The mayor of Detroit doesn’t have much power over the international market for automobiles, and no mayor of New York can take all the credit for the economic juggernaut of Wall Street. While mayoral policies may have an effect on the margins, such factors as the state and national business cycle, broad demographic patterns and international business trends tend to have a much greater impact on economic inequality in cities.”

Christie attacked President Obama‘s handling of national security and, in particular, he pointed to cyberattacks launched by China against the U.S. government.

One of Christie’s biggest qualifications, he insists, is his ability to win votes from both sides of the political spectrum.

New Jersey does have more Democrats than Republicans, making this statement true.