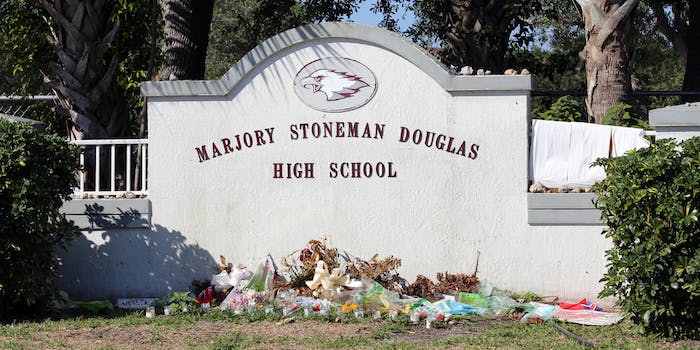 'He's always been very conservative, but now QAnon has consumed his life to the point where it's tearing our family apart along with my mental health.'

An anonymous redditor claiming to be a survivor of the mass school shooting at Stoneman Douglas High School in Parkland, Florida claims that their father now believes it was a false flag operation. The redditor says that the video of Rep. Marjorie Taylor Greene (R-Ga.) harassing fellow shooting survivor David Hogg sent their QAnon father down a “rabbit hole” that eventually convinced him that the shooting was a hoax.

Seventeen people were killed and 17 injured in the 2018 school shooting. QAnon conspiracy theorists, who believe a Satanistic cabal of cannibalistic pedophiles controls the planet, have falsely claimed that many mass shootings, such as Parkland and Sandy Hook, were actually false flag operations.

“I think my dad has gone fucking insane. It’s going way too far and I have trouble processing the last 5 months. He’s always been very conservative, but now QAnon has consumed his life to the point where it’s tearing our family apart along with my mental health,” the redditor wrote on the QAnon Casualties subreddit on Tuesday.

The redditor did not respond to an interview request from the Daily Dot. They told VICE they are afraid to reveal their identity because “it might be picked up by a QAnon forum.”

They write that their father claims to be an expert on body language and thus can tell that shooter “Nikolas Cruz is a radical commie actor who was paid to sacrifice his life in order to remove our guns.” They say that he also believes the trial will be rigged and that Florida is seeking the death penalty to keep Cruz from talking.

“What’s really fucked is that he knows I never want to hear about [Cruz] or see his face ever again. I’ve been very clear on that and I always leave the room when he starts talking about him,” they write.

“I keep telling him to please, please fucking stop but there’s no reaction or empathy whatsoever.”

The redditor says that their father’s constant berating about the shooting is triggering a recurrence of survivor’s guilt and other symptoms of post-traumatic stress disorder.

“…I fucking hate him for it. I worked on it for so long and now I once again feel like the biggest piece of shit for being able to have good days when there are parents still grieving.”

Now, the redditor writes, their brother may have also begun to doubt the shooting was real.

They say that they begged their mother to intervene, but she’s “timid” and fears confrontation, so her solution was to suggest they simply try to stay out of the house as much as possible.

The redditor also posted about their father on the Mom for a Minute subreddit.

“For the past year some really bad stuff has consumed my dad’s life,” they wrote there. “[Five] months ago he fell down a rabbit hole that convinced him the shooting was a hoax and therefore I’m a liar and was part of a false-flag operation.

“He’s often drinking which obviously makes it worse, but at this point I think he’s completely lost his mind.”

They add that their mother leaves the room when their dad starts ranting, leaving them alone with him with no idea of how to make him stop.

“Hearing the shooter’s name over and over again and seeing pictures when my dad knows it’ll instantly bring me back makes me cry every single time,” they write.

“…I hate it. I hate it so much. The worst thing is that I recently started feeling relatively normal again, and now I think I have to start over again but this time without my mom’s support. All I want is for her to help me and actually be a mother again.”

Both posts inspired waves of supportive comments. Many were outraged at both parents, though some suggested that their mother is also a victim. A few claimed to have had similar experiences. One redditor said that her husband’s sister was killed in the 2014 Isla Vista mass shooting. Now, she says, her QAnon aunt claims the shooting was a hoax.

“If it were true, then WHY THE FUCK hasn’t my sister come home? Why is it quiet and solemn every damned Christmas and Thanksgiving or Easter? Is she part of some hoax, paid off and living the rich life for some money without ANY heads up or warning?” she writes.

“…I am SO SO sorry that your own dad of all people are sucked into this conspiracy and that shootings are all hoaxes.”

The post on QAnon Casualties, which functions as a support group and venting forum for people with loved ones sucked into the conspiracy theory, was screenshot and tweeted. There it solicited similar reactions.

“When I say these people are gone, they’re irredeemable, they’re not coming back, that you should just make your peace with it, I am not saying those things to be edgy or cynical. They’re. GONE,” tweeted one.

Since emerging from 8kun (then 8chan) in 2017, QAnon has captivated millions around the world.

A poll in late May found that 15% of Americans believe in the conspiracy theory, which looks to former President Donald Trump as a leader fighting the fictitious cabal. The poll found that Republicans are significantly more likely to believe in QAnon.