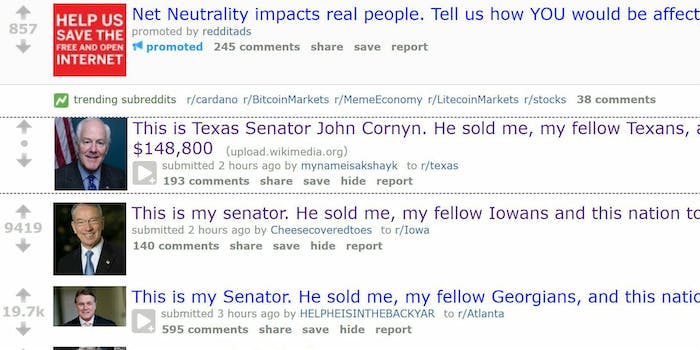 Here are all the senators who sold out to telecom companies

As the vote to kill net neutrality draws near, members from one of the internet’s most outspoken communities are outing the politicians who they feel betrayed them.

The main page of Reddit is flooded with posts revealing the senators who received money from telecom companies to vote against regulations imposed on internet providers. Each of the posts follows a similar format, “This is my Senator [name]. He/she sold me, and my fellow [state residents], and this nation to the telecom lobby for the price of [amount].”

Here are a few examples.

This is Texas Senator John Cornyn. He sold me, my fellow Texans, and this nation to the telecom lobby for the price of $148,800 from texas

This is my Senator. He sold me, my fellow Georgians, and this nation to the telecom lobby for the price of $37,000 from Atlanta

Posted to the subreddits of individual states or cities, the dozens of posts hold tens of thousands of combined upvotes as of Friday morning. It appears the information contained in the posts comes from a list compiled by the National Institute on Money in State Politics and posted to the Verge. It reveals the representatives who, in a March vote, gave telecom companies the right to take and sell your web browsing history without permission.

The online protest comes weeks before the Federal Communications Commission (FCC) is expected to repeal net neutrality laws, which restrict internet service providers (ISPs) from slowing down or limiting access to certain websites. Under the new rules, ISPs like Comcast, AT&T, and Spectrum, would have complete control over internet traffic.

This isn’t the first time redditors have united against the proposal to end net neutrality. On Nov. 22, dozens of posts were uploaded to a range of subreddits pleading for users to protest against the repeal. That came one day after FCC Chairman Ajit Pai unveiled his broad plan to repeal the Obama-era rules.

Redditors aren’t alone in their quest to save net neutrality. A study funded by the broadband industry found 98.5 percent of the 22 million comments uploaded to the FCC’s site support current regulations. Pai said the number of pro-net neutrality comments won’t change his mind.

Here is a list of the senators who received such donations from the telecom industry, organized by state and ranging from $1,000 to north of a quarter million dollars:

Reddit is keen to bring attention to the other elected representatives as well, those fighting to keep net neutrality rules in place and those rare senators caught in the crossfire.

These are my Senators. They stood up for me and my states right to a free and open internet. from illinois

This is my Senator. She did not sell me, my fellow New Hampshirites, and this nation to the telecom lobby. from newhampshire

This is my senator. It’s a great place to catch a movie for only $11.50 for an adult. And they sell beer. from maryland

The FCC will vote on whether to kill current net neutrality laws on Dec. 14.