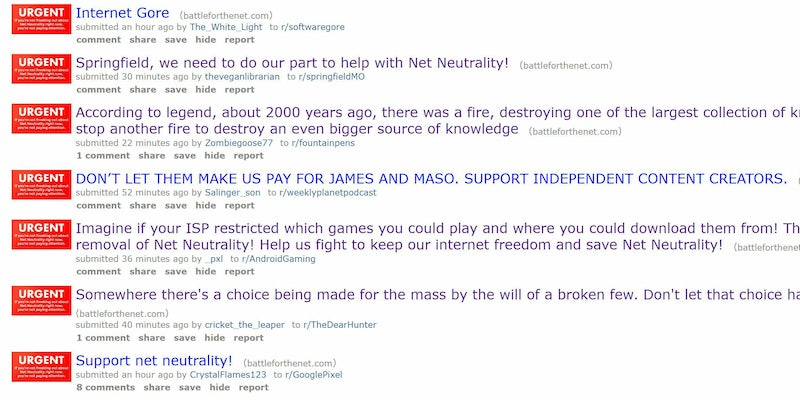 From r/kpop to r/NASCAR, Reddit users are all asking for the same thing.

The many diverse groups on Reddit are all uniting under one cause: to save the internet.

On Tuesday, FCC Chairman Ajit Pai unveiled a plan to repeal Obama-era rules that ensured fair treatment of internet traffic. The new regulations will all but dismantle net neutrality, taking power from users and handing it to internet service providers (ISPs), like Verizon, AT&T, and Comcast—allowing them to speed up or slow down certain websites.

The decision has been widely criticized by digital rights groups and dozens of internet companies, with net neutrality activists already planning to protest at Verizon stores on Dec. 7.

Now users on Reddit are speaking up as net neutrality faces the chopping block. The social news site, which calls itself the “front page of the internet,” is being flooded with red “urgent” banners, warning users of the proposal.

Dozens of subreddits are filled with posts, all containing an image that reads “URGENT: If you’re not freaking out about net neutrality right now, you’re not paying attention.”

For example, on r/NatureisMetal, “Nature is Metal, but what’s also metal is joining the Battle for Net Neutrality!” a post with more than 12,000 upvotes reads.

A post in the /DunderMifflin subreddit warns, “Do you want to lose The Office? If not, help end the plan to gut Net Neutrality so we can all enjoy our rewatch binges!”

One post from the /TropicalWeather subreddit has more than 46,000 upvotes, “Imagine if you could only go to weather.com to get your hurricane updates. Fight for net neutrality!”

Each of the posts contains a line about the effects of the new ruling and links to a pro-net neutrality website called “Battle for the Net.” The website contains a direct link to call and complain to members of Congress. More than 250,000 people have called from the site.

Also plastered in large font on the site’s front page is a plea, “This is your last chance to stop ISPs from messing up your Internet.”

Reddit has always been a popular destination for internet activists to discuss issues about internet regulation, but never before have we seen such a diverse range of subreddits come together to fight for a singular cause.