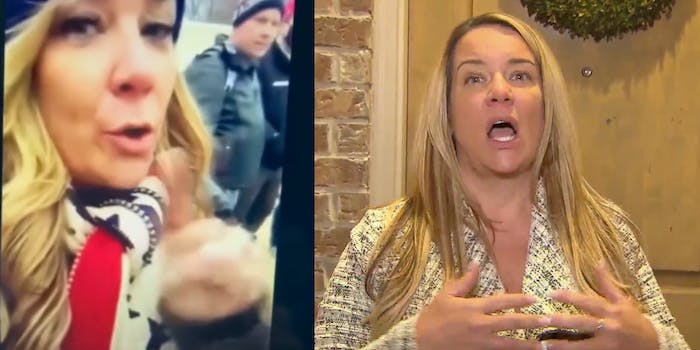 Realtor who flew on private jet to storm the Capitol pleads to Trump: ‘I think we all deserve a pardon’

'I listened to my president, who told me to go to the Capitol.'

A Texas realtor who was arrested for storming the Capitol is pleading with President Donald Trump for a pardon. After her arrest, Jenna Ryan told reporters outside her house she was doing “quite well” but asked Trump to pardon all rioters.

“I think we all deserve a pardon,” Ryan told CBS DFW 11. “I’m facing a prison sentence. I think I do not deserve that and from what I understand, every person is going to be arrested, that was there, so I think everyone deserves a pardon.”

Ryan told reporters she wasn’t allowed to discuss the details of her case. But did say getting arrested by the FBI was a “strange experience.”

Ryan said she doesn’t feel guilty for her actions, but she does feel “wronged.” She said her business has been affected by her arrest and she is getting “slandered” online.

She told reporters she was just following Trump’s orders by going to the Capitol.

“I want people to know that I am a normal person,” Ryan said. “I listened to my president, who told me to go to the Capitol, that I was displaying my patriotism while I was there and I was just protesting and I wasn’t trying to do anything violent and I didn’t realize that there was actually violence and it went way out of proportion.”

Ryan apologized to anyone affected by the “negative environment” rioters created.

“I am not the villain that a lot of people would make me out to be,” she said.

Ryan posted multiple times on social media about her involvement in the riots. Different videos Ryan posted show her saying, “We’re going to break the windows” and “We are going to f*cking go in [the Capitol], life or death, it doesn’t matter.”

One police officer and four rioters were killed at the Capitol. Additionally, rioters may have been targeting certain politicians, including Vice President Mike Pence, for assassination. However, investigators have not yet found direct evidence to support allegations of assassination attempts.