The Reagan Battalion bills itself as a conservative group, but its web trail tells a different story.

Far-right provocateur Milo Yiannpoulos was booted from the Conservative Political Action Conference (CPAC) and lost his $250,000 book deal on Monday after a compromising video surfaced in which he appears to defend pedophilia.

Yiannopoulos, a senior editor at Breitbart News until he resigned on Tuesday, has painted himself as the ultimate champion of free speech. He’s notorious for his disparaging comments about Muslims, women, transgender people, and widespread bullying against these groups.

The decision to drop Yiannopoulos from the CPAC speaker lineup and cancel publication of his book received cheers from Republicans and Democrats alike, while people who affiliate with the fractured alt-right movement, of which Yiannopoulos is a controversial and sometimes reluctant voice, lamented the move as political hit job and a loss for free speech. Others, like author Roxane Gay, called out publisher Simon & Schuster for not acting sooner.

Digging into the group that sparked the uproar over Yiannopoulos’ comments about pedophiles, which he has since condemned, reveals a knot of links that leads back to an independent conservative presidential candidate, a pro-Democrat progressive operative, and one of the most active grassroots movements in the United States.

The video of Yiannopoulos, which was freely available on YouTube, was promoted by the Twitter account of a group calling itself the Reagan Battalion, an elusive and apparently conservative activist group. The video sparked an immediate uproar in conservative circles, with many calling for Yiannopoulos to be dropped from CPAC.

.@ReaganBattalion's statement in regards to #ACUConservative rescinding their invitation of Milo Yiannopoulos to speak at #CPAC2017. pic.twitter.com/Z6iEiy4jp0

Who exactly is behind the Reagan Battalion brand is immediately unclear. Reagan Battalion’s online presence is remarkably sparse. It consists only of a website, which advocates for 16 popular conservative blogging and news publications, as well as a Twitter account and a Facebook page where the group describes itself as a “source for news, information, commentary, from a conservative perspective.” 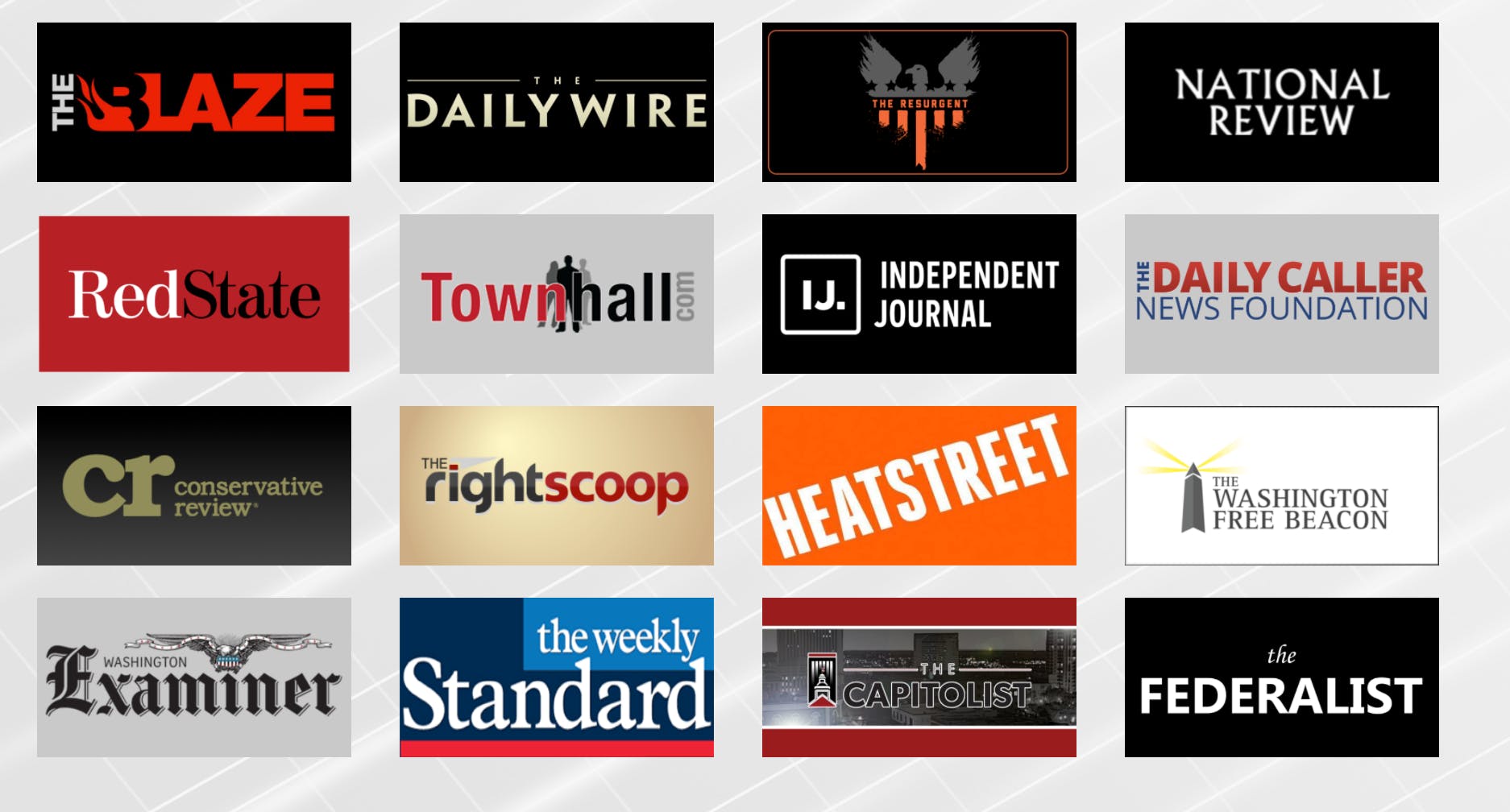 Employees at four of the publications listed by the Reagan Battalion—the Daily Caller, the National Review, the Federalist, and the Blaze—said their companies have no affiliation with the Reagan Battalion. “We have no affiliation with this site at all. Looking at it, I assume this is just his way of promoting websites that he likes,” Leon Wolf, managing editor of the Blaze, told the Daily Dot.

“No relation at all,” said Madeline Orr, a spokeswoman for the Federalist, of the Reagan Battalion. “Never heard of them, and ‘the Federalist’ logo they have on their site is not our logo. Looks like a knock off.”

Other publications listed on the Reagan Battalion site did not immediately respond to requests for comment.

A quick run back through the group’s posting history reveals that it backed Evan McMullin for president during last year’s election.

The Reagan Battalion is even featured on McMullin’s campaign website: 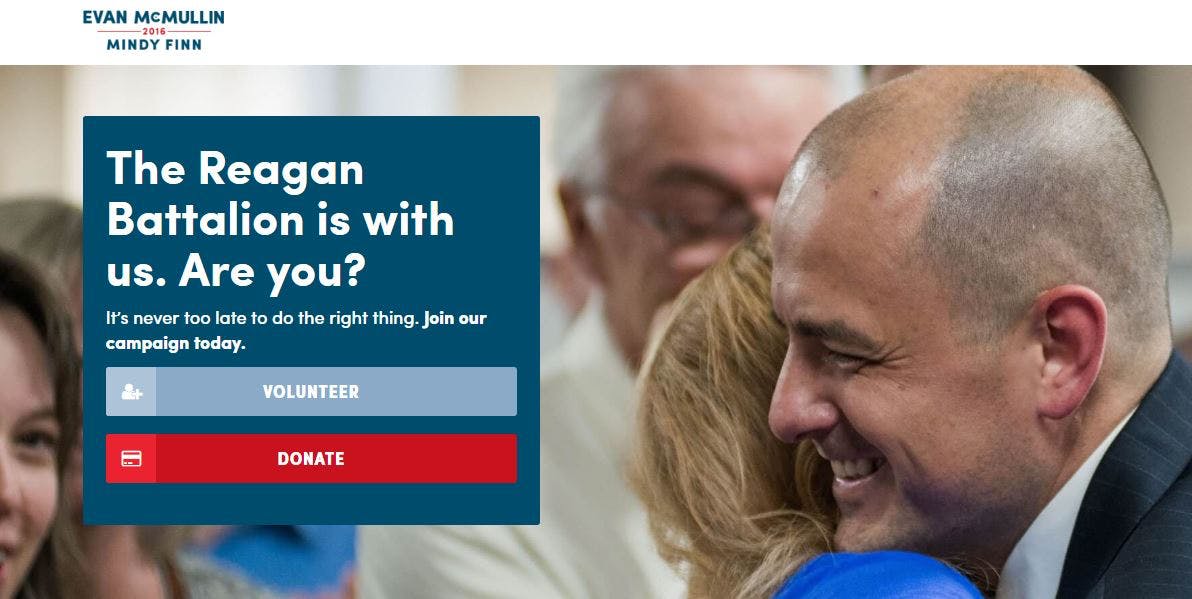 McMullin was a former CIA operations officer turned investment banker who ran as an independent presidential candidate in the 2016 election. He was an opponent of President Donald Trump, a voice in what became known as the #NeverTrump movement—a trend, rather than a cohesive or clearly organized initiative.

In a tweet posted on Monday, after news of Yiannopoulos’ book deal hit the internet, McMullin retweeted a pro-Trump activist who alleges the former candidate spent $250,000 on opposition research against Yiannopoulos and was involved in his ouster.

After publication, Reagan Battalion tweeted that it was never affiliated with McMullin’s campaign and teased more details in a forthcoming interview with an unnamed publication, which was later revealed to be Mic.

1/2 Although we supported @Evan_McMullin's candidacy, we were never affiliated with his campaign. https://t.co/EMungHVd0J

2/2 We gave an exclusive interview to a news organization detailing our mission, that will be published later today.

More revelatory, perhaps, the only contact information on the Reagan Battalion Facebook page is a link back to a now defunct website for the Stop Donald Trump PAC. However, the “Stop Donald Trump PAC” never existed in any official capacity, according to a search of Federal Election Commission records.

An archived donation page, which appears to be exactly the same as a hidden donation page on the current Reagan Battalion website, suggests that the site was managed and paid for by an official PAC registered with the FEC under Stop Trump PAC.

The Stop Trump PAC named on the donation page was established in March 2016 in opposition to Trump’s presidential bid but was quickly forced by the FEC to close down in June because it used a political candidate’s name in its own PAC.

The donation page for the Stop Donald Trump PAC explains at the bottom that it was paid for by the Stop Trump PAC and lists the website StopDonaldTrump.com. Interestingly, that site now redirects to the Indivisible Guide. Indivisible Guide is a grassroots group, backed by progressives and some Democrats, that is often characterized as the Tea Party of the Left.

The Reagan Battalion Twitter account was established months before the Stop Trump PAC, in December 2015, and its website was registered months later, in July 2016. Prior to backing McMullin, the group regularly tweeted out support for Sen. Marco Rubio (R-Fla.) before his presidential bid failed to topple Trump, who the group consistently called a “liberal.”

Curiously, on July 11, 2016, just weeks after terminating its FEC registration, the archives show that a page appears on the Stop Trump PAC’s website dedicated to the Reagan Battalion, although it contains no information on the group.

Further complicating matters, the named treasurer on the FEC records for the Stop Trump PAC is Nathan Lerner.

Lerner is now the executive director of the Democratic Coalition Against Trump, previously known as the Keep America Great PAC. Co-founded by Lerner and Scott Dworkin, the Keep America Great PAC aimed to raise $20 million to mobilize voters who were not pleased with either Trump or Democratic nominee Hillary Clinton. As the Democratic Coalition Against Trump, the group “now exists to hold the Trump White House accountable,” according to its website.

The Daily Dot reached out to Lerner for comment but has not received a response.

“We have no idea who that guy is,” the Regan Battalion co-founder said of Lerner. “He has some affiliations with the Democratic Party, but we have no affiliation whatsoever with that guy.”

It remains unclear whether the literal name and URL link to a pair of progressive groups reveal an effort to undermine certain segments of the conservative movement—or simply reveal the messy nature of American political groups and the possibility of a couple of strangely coincidental typos an after-the-fact URL redirect.

What is clear, however, is that Milo Yiannopoulos made some unfortunate public statements about pedophiles, which led to his recent downfall—no matter who first tweeted out the video.

Update 3pm CT, Feb. 21: Yiannopoulos has resigned from Breitbart News. He says he plans to launch a new media venture later this year.